"I was given the confidence to go forward with every aspect of my life.  Easter Seals gave me the strength to continue." 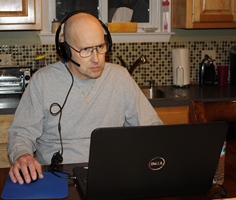 Jim Wood kept a diary for many years but he never considered himself a writer – until he met Easter Seals Assistive Technology Specialist Jean Des Roches.

Jim, 51, was facing a number of obstacles when he met Jean.  He has difficulty walking and numbness in his hands, due to multiple sclerosis.  Typing was just about impossible.  Memory issues made it difficult for him to use the laptop he shared with his wife and daughter.  And although he had Dragon Naturally Speaking voice recognition software, he had learned only the basics.

Jean provided Jim with a laptop, printer and cordless mouse, and began training him to use Dragon.  This enabled him to write, communicate with his doctors and keep in touch with his friends and family.

She also gave him something priceless – the encouragement he needed to publish a short story that became his first Kindle book.

His new book is based on a near-death experience Jim had several years ago during open-heart surgery.  The experience convinced him that his meaning in life is to help others.

“I have a new outlook on things because of assistive technology,” Jim explained.  “I was given the confidence to go forward with every aspect of my life.  Easter Seals gave me the strength to continue.”

Jim plans to write more about his years of coping with MS and to reach out to others who are struggling.  A Bellingham resident, he began that effort by joining Easter Seals to talk with state legislators about the importance of funding Assistive Technology programs for people with disabilities.

“Easter Seals came into my life,” he added, “and it’s been awesome ever since.”

The Easter Seals services Jim received were made possible by a partnership with the Massachusetts Rehabilitation Commission.