Home > _Easterseals Massachusetts > Who We Are > News 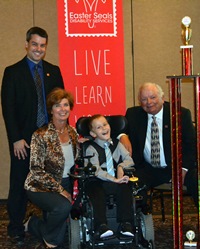 Easter Seals recently presented 10-year-old DJ Cibor of Ayer with its 2015 Richard A. LaPierre Pioneer Award at a reception at Embassy Suites in Waltham. Easter Seals services empower people with disabilities to reach their full potential.

The Pioneer Award is given annually to a boy or girl with disabilities in Massachusetts who demonstrates the pioneering spirit of former Easter Seals President Richard A. LaPierre.

“I applaud DJ on this well-deserved recognition of his pioneering spirit of resilience and triumph,” Easter Seals President Paul Medeiros said. “I join in congratulating him on his past achievements, and I look forward to cheering him on with his future goals.”

“We’re proud of all our children, but it’s especially gratifying to see DJ recognized for something he did on his own – rather than something we did with him, or for him,” said Patti Cibor, DJ’s mother. “DJ doesn’t always think of himself as an independent person, so this award made him feel really proud. He earned it, because he works so hard.”

Because of cerebral palsy, DJ has visual difficulties, uses a power wheelchair and finds it hard to control his hands and his head movements. When he first met Easter Seals Assistive Technology Specialist Kate Ahern three years ago, he was unable to use a computer, even with help.

Working closely with Ahern, DJ was fitted with a specially adapted joystick for his right hand, a head switch to “click” and an on-screen keyboard designed just for him. As a result, DJ is able to do his fifth grade schoolwork independently at the Lura A. White Elementary School in Shirley, and he uses a computer to access adaptive books.

Cibor said that she and her husband, David, initially struggled with the decision of whether to send DJ to school locally with the help of an aide or to a special needs school an hour away. They believe that Easter Seals has made all the difference in their son’s academic progress within his hometown school district.

“We’ve always known DJ’s potential, but not how to best help him communicate all the knowledge he has,” she added. “Easter Seals has been phenomenal in helping DJ, since he gets frustrated when he can’t be clearly understood. I can’t imagine Easter Seals not being in DJ’s future as he grows and wants to access even more academically.”