A low-interest loan program helps people with disabilities purchase and borrow technology and other devices to help them live more independently. Read our stories to see how. 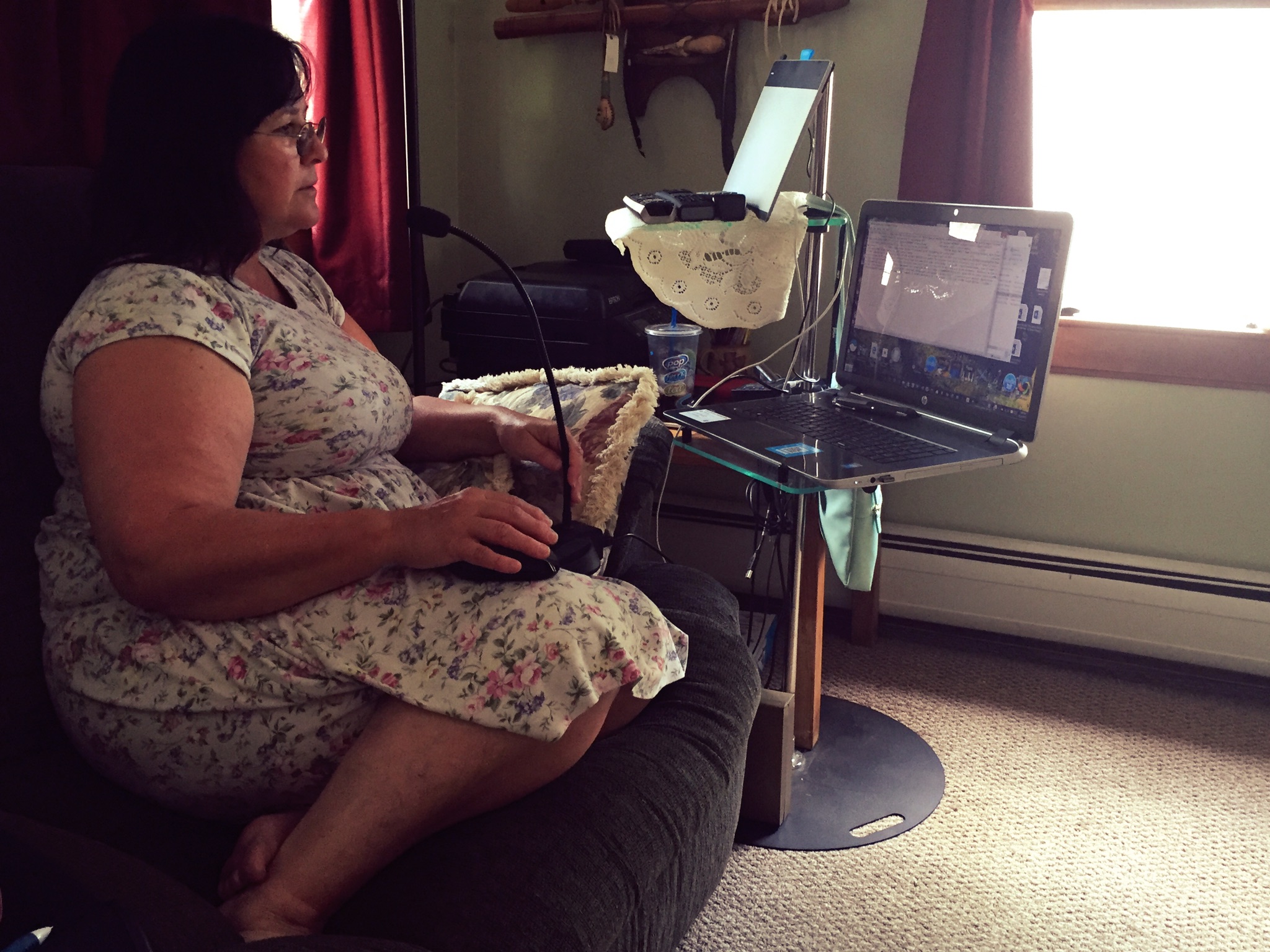 Sometimes the littlest things can be major obstacles for people with disabilities.

For Dawn Mendes, who suffers from a severe form of Osteoarthritis in her spine, the lip on the front door step of her Taunton home was just high enough to prevent her from taking her electric wheelchair out of the house.  She could no longer take walks around the neighborhood with her daughters and when no help was available, Dawn spent a lot of time inside, by herself.

As Dawn’s Osteoarthritis progressed, using her hands to paint and type became harder and harder.  Being productive is incredibly important to Dawn, a 5th degree black belt, hiker, writer and artist, who was forced to end her teaching carrier after 27 years. “Having a disability can be incredibly isolating if you are not aware of the resources available to you,” Dawn noted.

Fortunately the Rehabilitation Commission in Taunton, as well as a counselor at Independence Associates told Dawn about Easter Seals MA and now, thanks to the Assistive Technology (AT) Program, Dawn now has several items on long-term loan so she can easily exit her home, write and create on a daily basis.

The AT Program changed her life.  “I am so very grateful to Easter Seals MA,” Dawn said.  “Without my faith in God and Easter Seals MA, my life would have consisted of lying on the couch and I would not have the opportunity to use my gifts or go on walks with my girls.”

Dawn is currently writing several books and designing their covers thanks the computer station and software programs provided the AT Program and set up by AT Specialist Jaimie Ballon.  “Jaimie has an amazingly positive attitude, she has the astounding ability to be realistic, caring and empathetic all at the same time,” Dawn said. “She is a great support system, when I worry about my ability to continue writing and being creative, she calms me down and  explains that the technology available through Easter Seals MA can help me stay productive even as my condition worsens.”

Easter Seals MA not only helped Dawn start living her life again, it also made a huge difference in her daughters lives,  “My girls loved to go on walks around the lake we live on,” she said, “with crutches I could barely get down my driveway, but when my ramps were installed, we began enjoy the outdoors together again.  I was able to go to parent teacher meetings and be part of their lives outside of the house. Easter Seals MA not only expanded my life, but my children’s lives, too.”

Don Bradway bought a mini-van a few years ago, thinking it would be goon on gas.  But it turned ou that his power wheelchair was cramped in it, which caused him to develop migraines.

Don is currently unable to work and he knew it would be difficult to get a traditional loan to replace the van. So the former Easter Seals employee turned to the Massachusetts Assistive Technology Loan program for help with the financing.Through the program, managed by Easter Seals, he received a loan with rates he could afford.

“It has made all the difference in the world,” Don said.

His new van gives this articulate, funny and very determined Worcester resident, who also plays on a power-wheelchair soccer team, the independent life he wants.

"The van allows me to get out to doctors' appointments, go to concerts with friends and catch some nightlife," he said.

A city van service is available but stops running at 9 p.m., just the time when bands begin playing at local clubs, he pointed out.

Don, 44, is also working with an Easterseals technology specialist, Oren Kuhn, to master voice-recognition software.  He's using the software to write a book about his life that details, as he put it, "the trials and tribulations I've gone through to get me where I am today."

"I with I had the software when I was in college, tying 10-and 15-page papers with one finger," the Quinsigamond Community College graduate said.

Don recalled that a cousnelor once told him he didn't have what it takes for college.

Don couldn't wait to call the counselor after his first semester in college.  He had an important piece of news for him:  "I made the Dean's list."

Several years ago, a brutal assault based on mistaken identity left Ben (not his real name) with serious, permanent injuries that left him unable to walk.  In the months that followed he lost his entire retirement savings.

Ben had escaped from persecution in his country in the Middle East to live in freedom.  Now he, his wife, mother and five children – three of whom have autism – are living in crisis.

When Ben lost his car, he applied for a loan to buy a van that was compatible with his power wheelchair, but bankruptcy had ruined his credit rating and numerous loan applications were rejected.

All that changed, however, when he discovered the Easterseals Assistive Technology Loan Program, which provides low-interest cash loans and equipment loans that enable people with disabilities and their families to live more independently.

Through the program, Ben not only got the car loan, but also ramps to make it easier for him to get his wheelchair in and out of his home in Springfield.

Ben is currently bedridden and unable to use his car loan.  Easterseals has put the loan on hold for him until he is able to use his wheelchair again.

“It wasn’t just helping me with the process,” Ben added, “it was the tone of the voice, the professionalism and the speed of the process.  Easterseals changed the quality of life for my family and gave us peace of mind – the greatest gift anyone can give.  If every organization was the same as Easterseals, our society would be a better place.”