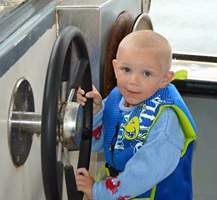 Although 18-month-old William had met all of his developmental milestones, William's mother, Ashley, noticed that her son was avoiding using his left hand. He was diagnosed with mild cerebral palsy and immediately began receiving early intervention services of physical and occupational therapy in their Worcester home through a collaboration with Easterseals Massachusetts and Pernet Family Health Service, Inc.

“He is super strong-willed, so he needed someone who would make him work – which is what he got,” Ashley said of William, now 3 years old. “We noticed improvements almost right away.”

With the condition affecting his left side, Occupational Therapy Clinical Supervisor Valerie worked weekly with William on using both hands simultaneously in a controlled and organized manner and improving fine motor skills. William focused on his left hand during functional play when doing puzzles, stacking blocks, stringing beads, pinching and rolling Play-Doh, and playing a variety of games. During his weekly physical therapy sessions, William worked on his balance, flexibility, strengthening exercises, navigating stairs, and throwing a ball.

Then William was given the proper encouragement, Valerie said he willingly participated in requested activities and began to master new skills at a rapid rate. She attributes his progress largely to the excellent support and carryover of his parents: Mark, a school behavior therapist, and Ashley, a former special education teacher. In fact, Valerie said they both took special interest during therapy sessions and eagerly assisted William with his “homework” the rest of the week. 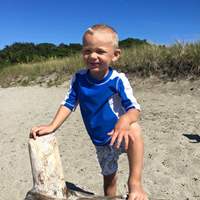 Having previously worked with Easterseals speech therapists in conjunction with her students, Ashley said she was confident that her son was receiving superior care. In fact, she credits Valerie’s structured approach to therapy with William’s smooth transition to his public preschool, where his teachers have praised him for paying attention and following instructions. William is also impressing his parents at home, where he loves to draw now that he knows how to hold a piece of paper steady with one hand while using a marker with the other.

“William always greeted me with excitement and was eager to dive into my bag of toys. In the context of play, he worked very hard during his therapy sessions and did great as a result,” Valerie said. “While many activities were challenging, William was resilient and always accomplished his goals with a smile on his face. It was very gratifying to witness his progress.” 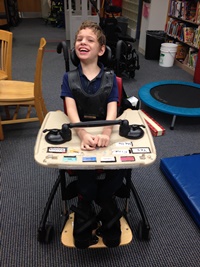 Like many of his third-grade classmates, Damian of Malden loves to sing and dance, especially to Carly Rae Jepsen’s “Call Me Maybe.” The song is even played for him at school – as special motivation during his therapy sessions.

The 10-year-old has cerebral palsy and is unable to perform precise movements or speak. It’s also difficult for him to gain weight because of the exertion from his constantly moving limbs. Despite Damian’s challenges, however, his work ethic in therapy continues to yield considerable success.

Easterseals physical therapists have been working closely with Damian and his team at school to increase his mobility and improve his ability to communicate. In recognition of his positive attitude and determination, Damian was honored with the 2015 Richard A. LaPierre Pioneer Award.

The Pioneer Award is given annually to a boy or girl with disabilities in Massachusetts who demonstrates the pioneering spirit of former Easter Seals President Richard A. LaPierre, a pioneer in developing services for people with disabilities. Even at his young age, Damian embodies that spirit of determination.

“We’ve been impressed with the services Damian has received. He seems to be much happier and more confident, which for any parent is a big deal,” said Jessica, Damian’s mother. “We’re grateful to Easter Seals for the progress he has made, and we hope more kids out there benefit from its programs as he has.”

“It’s great for [Damian] to be acknowledged because he works so hard.”

Before 17-year-old Vy immigrated to the U.S. from Vietnam in 2011, the teen hadn’t received many services for the challenges she faced as a result of spastic cerebral palsy. Soon after moving to Boston, Vy began work with Easter Seals therapists, including occupational, speech-language, and physical therapies.

The strong relationship established between Vy, her family, and her Easterseals clinicians is most evident in the significant progress she has made over the last two years.

Now a happy, enthusiastic 19-year-old, Vy is making progress toward consistently using a wheelchair customized with support from Easterseals and communicates primarily through eye-gaze and vocalizations. In therapy, she is working to improve her core strength and fine motor skills in order to increase her ability to independently access items in her environment.

According to Easter Seals occupational therapist Jacqueline, Vy receives all three services twice a week at her home in Dorchester – both one-to-one and through a team approach with physical therapist Rhiannon and speech-language pathologist Allison. Vy is currently tutored at home, but her family and her team are working toward the goal of Vy attending school and having improved access to her community.

“You can see the gains she has made, both in terms of her body positioning and the amount of time that she can spend now doing therapy,” said Jacqueline, noting that Vy’s family and tutor also work with her by encouraging functional positioning and expressive communication. “We have good collaboration as a team, which is important because of the multiple areas she’s working on.”

Vy continues to make progress in therapy and enjoys going to the beach and shopping at the mall. She also loves joking around with her family and therapists and is particularly fond of her stepfather, who receives a bright smile and laughter each time he enters the room.

“One of my favorite things about Vy is her good sense of humor,” Jacqueline said. “I love working with Vy, her family, and our team.”