When Julie reminisces on her son Junior’s first 12 months of life, she remembers him speaking English and Spanish words, eating practically everything given to him and being a social butterfly. But by the age of one and a half, that all stopped, and Junior regressed. He became picky about food and stopped speaking and socializing.

After taking Junior to countless doctors, he was finally diagnosed with Autism.

“I was so lost and confused,” Julie said.

He was initially referred to an ABA therapy provider that helped Junior communicate and hit various milestones. Julie would watch the behavioral interventionists (BIs) when they worked with her son and learned how to be consistent with the programming after the BIs left.

Two years ago, when Junior was seven years old, he started developing new problematic habits Although Julie said she knew how to execute the previous plans created for Junior when he was a child, she didn’t know how to create a plan to combat these new behaviors. She also wanted to help Junior create new positive behaviors to help him hit appropriate milestones for his age.

This time Julie was referred to Easterseals Southern California (ESSC) and received parent training sessions to refresh her understanding of ABA and to help her son further.

“It was like going to college,” Julie laughed. “It was not easy, but they taught me how to create a program. The way I felt, it was like I was being trained to work as a BI.”

Julie worked with Stephanie Vanzant, a program manager, and Min Joo Kim, a clinical supervisor with ESSC Autism Services. Twice a week, they met over Zoom.

“Initially, we started working on a parent training curriculum to give her the knowledge of ABA techniques. Then, we implemented these techniques using the behavior skills training,” Min said.

“The behavior skills training would be us giving her the instruction and modeling it for her. And then she would implement it after us modeling it. And then, we would give her feedback on things that she can improve on or did well on. And then we repeated the process.” 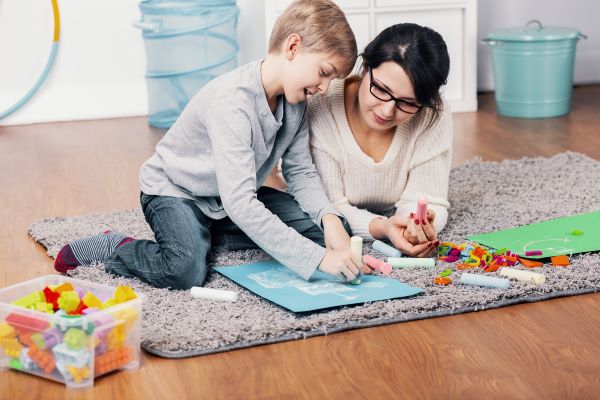 About a month ago, Julie graduated from the program. She said everything she learned helped her stop her son’s negative behaviors and implement new positive habits. She calls ABA “magic” and a “miracle.”

“I feel amazing because now, I can create a plan based on data and understanding when there are behaviors. I could never do that before, but Easterseals taught me the handbook,” Julie said.

“Working with Easterseals has helped me feel empowered.”