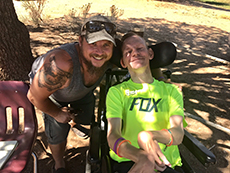 Now that summer is officially in the rearview mirror, we're already looking forward to next summer because the dates for the 2019 Easterseals Camp have been announced! It will take place August  4-10, 2019 at YMCA Camp Oakes in Big Bear, marking its 46th year.

Because Easterseals Camp is such a special place, many campers and volunteer camp counselors have been coming back year after year. As a result, special bonds are often formed, like the one between counselor Andy T. and camper Josh. The two of them have been paired up every year since Andy started volunteering in1992.

"Josh and I bonded right away," Andy explained. "If it didn't work we would have switched it up, but I think we've got something going," he quipped, and Josh nodded vigorously.

"I love catching up with Josh and seeing how life is going," Andy said. "We often get busy in our lives, but at Camp we get to slow down and catch up."

Andy, who lives in San Francisco's East Bay, began volunteering more than 25 years ago when a friend introduced him to Easterseals and told him they were looking for counselors. Previously Andy had worked with a friend of the family who was paraplegic, and he liked the idea of helping other people with disabilities experience the outdoors through camp.

When he began volunteering, Andy never would have guessed what an important role Camp would play in his life. The campers and his fellow counselors have become some of his closest friends. When he got married four years ago, 32 of the guests were friends from Camp. Catching up with them each year and seeing new people experience Camp for the first time are some of his greatest joys.

"I love the smiles—especially from the first-timers that come to Camp," Andy said. "To me it's the small things, like Josh and I catching up and seeing how life is… I feel almost selfish coming to camp. I get to hang out with great people and I realize how minor my problems are. When I come here my problems disappear. I'm recharged soul-wise."

Josh, who lives in Yucaipa, loves that Camp gives him the opportunity to be more independent and to break out of his normal routine. "Here [at Camp] I'm treated the same as everybody else," he said. "The disabilities disappear and we're all the same."