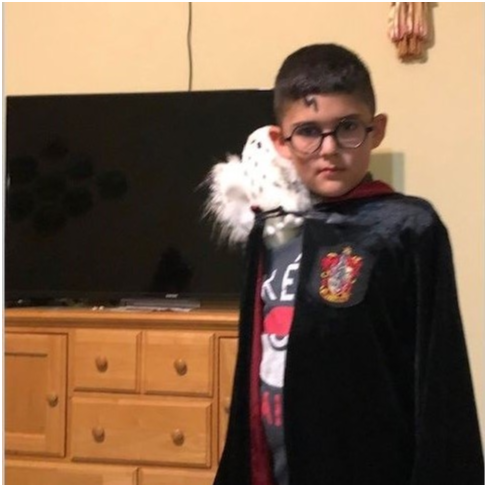 Eight-year-old Jacob enjoys going to school, socializing with friends and he was ecstatic for Halloween. He appears like a typical elementary school kid but his mom, Heather, says without Easterseals Southern California (ESSC), this wouldn’t be Jacob’s reality.

“When he started with Easterseals he wouldn't talk to anyone, there was no eye contact,” Heather said. “He couldn’t look me in my eyes. He would just look up and down.”

Jacob was diagnosed with Autism and ADD when he was just three years old. His mom says he endured many challenges, mostly when it came to socialization, communication and safety.

“He wouldn’t play with the other kids in school,” Heather said. “He would watch them and play on his own beside them, but he wouldn’t interact. He would also open the door for strangers, climb around where he wasn’t supposed to and frequently throw temper tantrums.”

Jacob started with ESSC when he was just four years old to help improve some of these behaviors. He received Applied Behavior Analysis (ABA) services at his home four times a week. He worked specifically with Jessica Flores, a Program Manager for Easterseals Southern California Autism Services and multiple behavior interventionists.

“Because Jacob wouldn’t look anyone in the eye, Jessica would put a sticker in the middle of her forehead and Jacob would see the sticker and remember to look at her eyes,” Heather said.

Flores has worked at Easterseals for five years. Besides the sticker strategy, she used numerous other techniques that helped Jacob’s socialization and safety. She focused a great deal on visual cues.

“Because Jacob lacked real safety awareness, he would open the door for strangers and climb on shelves in the pantry when he wanted a snack,” Flores said. “We placed stop signs on the front door and cabinet doors, so he knew to stop and ask for help before opening.”

“Jessica knows tricks that really helped Jacob,” Heather explained. “She got to know his personality and all of his likes and dislikes and challenges and she created a program that is best for him.”

Eventually, after less than four years, Flores said Jacob reached all his milestones, mastering every goal and catching up to his peers. The kid who at one time threw 10 or more tantrums a week was down to one. He learned how to socialize with other children and instead of sitting by himself, he would share his toys when other kids were around. Today, at eight-years-old, he is part of a mainstream classroom and he makes full eye contact with everyone from his mom to his peers and teachers. Jacob, with help from Flores and Easterseals, now communicates in a way he never did.

“He is not the same kid,” Heather said. “I truly believe Easterseals is why he has the success he has today. I really think it was all Easterseals; that's what kind of a difference they make.”

“Hearing that Heather spoke highly of me touches my heart,” Flores said. “I’m so happy I could help them. I love helping these children and parents. This is a very rewarding job and I’m just thankful I can help families achieve their goals and milestones.”