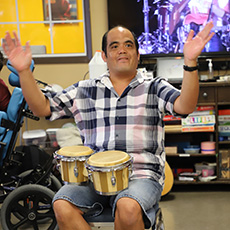 On a recent Friday, around 40 participants and associates at the Easterseals Adult Day Services center in Glendale watched as Robert, an ESSC participant for 16 years, who is currently involved in a community-based program, strummed his guitar strings and pounded a beat on his bongo drums. It’s become an exciting tradition in Glendale, whose participants look forward to the performance each week.

“He’s just excellent,” Darlene said. “It was so good. I was dancing. Did you see me?”

According to associates who have worked closely with Robert, his phenomenal talents have been cultivated over the years. He doesn’t read music; Robert is able to carefully listen and copy the melody based on sound.

“He is self-taught, and music is his thing,” said Rachel Saucedo., a Program Director at ADS Glendale. “A few years ago, he worked with one of our life skills coaches too, who helped him further his guitar skills.”

The former life skills coach named Trevor performed duets with Robert in various locations while he worked at Easterseals.

“They would perform next door and sometimes for other day programs,” Rachel said. “When Robert played with Trevor, he enjoyed it. They were kind of like ‘Simon and Garfunkel,’ they were a team.”

Eventually, Trevor left the company but that didn’t stop Robert from continuing to perform on his own.

“I like performing very much,” Robert said after his concert was over.

If he must miss a Friday, Saucedo said, he likes to come another day during the week to perform.