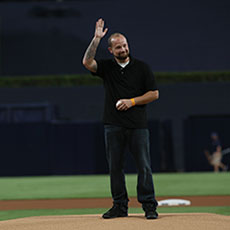 Tony, who is the sixth generation of his family to serve in the military, said he has played baseball his entire life and throwing the pitch was like a dream come true. The Bob Hope Veterans Support Program helped him transition back into civilian life after he served in the Marine Corps for five years, most recently as a sergeant stationed at Camp Pendleton. Participating in the program helped Tony enhance his job-seeking skills including preparing his resume, interview skills, connections with employers, and advocating on his behalf. As a result, he is now a project manager at the construction company SaveCal, and plans to study Business Management at Vanguard University starting this fall.

What’s more, CVS Health presented ESSC with a check for $4,000, a donation they raised through ticket sales to the game. Over the past 11 years, CVS Health has raised more than $10 million dollars in support of services provided by ESSC.

Click on the links to check out media coverage of the event on ABC 10, Fox 5 and the San Diego Union Tribune, and view photos from the event on our Facebook page.

Thank you to CVS Health, Linda Hope and to all who attended for your support! Learn more about the Bob Hope Veterans Support Program here. 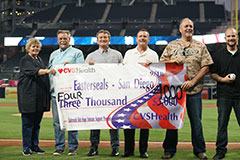