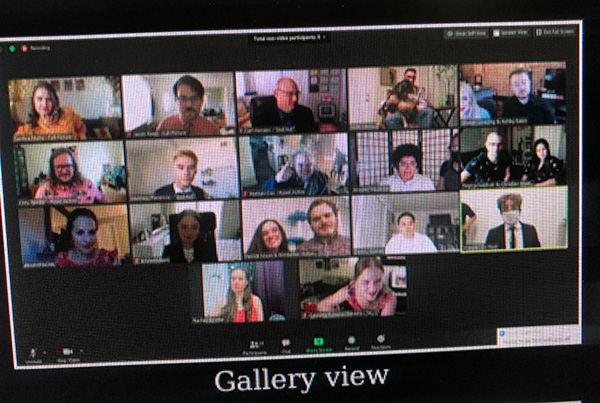 The annual Film Challenge empowers filmmakers, with or without disabilities, to tell unique a stories, providing opportunities for inclusion and representation for the world’s largest minority group.

In response to the pandemic, filmmakers were challenged to make a documentary short, all from the safety of their homes. Challenge participants had five days to craft their film, with the flexibility to incorporate previously shot footage in order to tell the story of what disability means to them.

“This is a record-setting year for entries, with steep competition. Each film is poignant and personal … and so well told, it was difficult for judges to determine our winners,” said Nic Novicki, Actor and Founder of the Easterseals Disability Film Challenge & Easterseals Southern California board member.

“The timing to tell these diverse stories of disability is perfect -- especially where we are, during a global pandemic, with an overwhelming number of people taking to our streets demanding justice, equality, inclusion and an end to systemic racism. And, as we celebrate the 30th anniversary of the Americans with Disabilities Act this year,” Novicki added. “The result: these authentic documentary shorts showcase outstanding creativity in storytelling and introduce us to important, new voices and talent.”

Alie B. Gorrie (Able: a Series, Amazon) and Cassidy Huff (DreamWorks Spirit Riding Free, Netflix) introduced a new video showcasing how Easterseals Disability Film Challenge partners across entertainment are portraying disability in storylines, and authentically casting for it, while at the same time, opening doors to meaningful careers in entertainment and media.

Additional finalists featured during the virtual awards include:

Novicki created the Film Challenge in response to under-representation of talent with disabilities in the entertainment industry, giving filmmakers the opportunity to highlight their work and provide them with meaningful exposure. The disability community makes up nearly 25 percent of the U.S. population, but is only seen in less than 3 percent of on-screen roles.

Winners of the Film Challenge will receive a one-hour consulting opportunity with Gena Desclos, SVP Post Production HBO, Tiffany Smith-Anoa’i, EVP Entertainment Diversity & Inclusion West Coast ViacomCBS, and a diverse team of executives at NBCUniversal. Directors of the 11 winner and finalist films will receive a one-year membership to IMDbPro, the essential resource for entertainment industry professionals, to help them continue achieving success in their careers. Today, a video playlist of the 11 winner and finalist films is featured on the site and app homepages of IMDb, the world's most popular and authoritative source for information on movies, TV shows and celebrities, and on imdb.com/awards-central. After today, each film will continue to be available on its IMDb title page.

Other prizes include the latest in computer technology from Dell Technologies; a $2,500 production grant provided by NBCUniversal; a Sony Alpha a6000 camera; a full-year subscription to Adobe Creative Cloud; as well as invaluable industry networking and exclusive professional development opportunities.

As someone with a disability, actor, comedian and producer Nic Novicki launched the Disability Film Challenge in 2013 in response to the under-representation of talent with disabilities both in front of and behind the camera. Novicki created the challenge to give aspiring filmmakers the opportunity to showcase their work and provide them with meaningful exposure. In 2017, Novicki joined forces with Easterseals Southern California – the nation’s leading nonprofit supporting people and families with disabilities – to expand the event, now known as the Easterseals Disability Film Challenge. Learn more at www.DisabilityFilmChallenge.com and join the conversation at Facebook.com/DisabilityFilmChallenge.

For more than 100 years, Easterseals has been an indispensable resource for individuals with developmental disabilities or other special needs and their families. The services provided by Easterseals Southern California (ESSC) – in Los Angeles, Orange, San Diego, Imperial, Kern, San Bernardino, Riverside and Ventura counties – make profound and positive differences in people's lives every day, helping them address life’s challenges and achieve personal goals so that they can live, learn, work and play in our communities. With 2,800+ employees, 60+ service sites and hundreds of community partnership locations, ESSC assists more than 13,000 people, providing adult/senior day services; autism therapy; child development/early education; employment services, veteran employment support; independent living options; and more. Join us in changing the way the world defines and views disabilities at easterseals.com/southerncal.