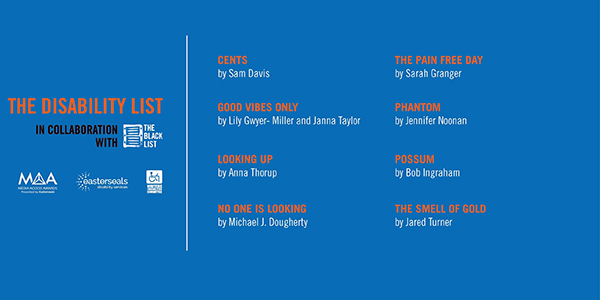 Eight scripts from seven writers and one writing team were selected for the second annual edition of the Disability List, which includes both feature films and original pilots. Selections were announced tonight as a part of the Media Access Awards - Black List founder and CEO Franklin Leonard highlighted this year’s selected writers during tonight’s ceremony.

Requirements for placement on The Disability List are below:

Participating organizations are thrilled about the second year of Disability List collaboration, and had the below to say about the partnership:

“Our goal is to highlight authentic storytelling by, and about, people with disabilities,” said Mark Whitley, CEO of Easterseals Southern California. “Through realistic and entertaining stories that don’t rely on stereotypes of what it means to have a disability we can change dated perceptions and create a more inclusive society. Hollywood has an important role to play in making that happen. We thank The Black List for our ongoing partnership in bringing these great stories to the forefront.”

“Having a disability is not a death sentence. As these winning scripts show, people with disabilities have lives as funny, complex, and utterly human as anyone else. In a year with so much discord, we believe the list and these writers bring a positive note to the world.”- Deborah Calla and Allen Rucker – Co-CEOs Media Access Awards

"It's been an absolute joy to work with the Media Access Awards, Easterseals, and the WGA Writers With Disabilities Committee to create the Disability List over the last two years, but that joy will pale in comparison to what we'll all experience when we can see these films and series on screen, cast with and made by members of the community as well." - Franklin Leonard, Founder and CEO of The Black List

Here are the eight scripts selected for the 2020 Disability List, in alphabetical order:

Frankie––a high school senior with an intellectual disability––sets a penny on the railroad tracks the morning of a freak train derailment. Assuming responsibility, he goes into hiding amidst a citywide evacuation and must survive on his own––a “fugitive” in a ghost town, with the police who “hunt” him, and a pile of combustible train cars looming.

GOOD VIBES ONLY by Lily Gwyer-Miller and Janna Taylor

Afraid to tell her bubbly best friend about her recent cancer diagnosis, a cranky TV director turns to a cancer support group. There she meets a diverse group of women who help each other through real-life problems that can’t be solved with good vibes.

LOOKING UP by Anna Thorup

A wheelchair-using twenty-something messes around and messes up in New York City.

NO ONE IS LOOKING by Michael J. Dougherty

Sam, a physically-challenged highschooler, kills a bully and thinks he got away with it because no one would believe a kid in a wheelchair would be capable of that, but he must find the bully’s missing severed head before anyone finds out about the murder.

After struggling for years housebound with severe pelvic pain, a dejected mother takes a risk and pulls her teenage daughter out of school for one day in an attempt to mend their strained relationship.

A double amputee combat veteran returns from Afghanistan and faces a new battle she must wage to regain herself.

When a band of thieves targets a charity for the disabled, the father of one of the disabled residents must find a way to thwart their plans.

THE SMELL OF GOLD by Jared Turner

After her husband is murdered in cold blood, a tenacious, young Scotswoman, with the help of an English tracker and his Māori son, sets out across the wild New Zealand landscape in pursuit of the accused, a reclusive Chinese gold-miner. All the while, they must fight to stay ahead of a vicious gang who are desperate to claim the bounty.

For more information about how to read this year’s selected scripts, please contact Kate Hagen (kate@blcklst.com) and Tayo Amos (tayo@blcklst.com)

The Black List, an annual survey of Hollywood executives' favorite unproduced screenplays, was founded in 2005. Since then, more than 400 Black List scripts have been produced, grossing over $29 billion in box office worldwide. Black List movies have won 54 Academy Awards from 267 nominations, including four of the last twelve Best Picture Oscars and eleven of the last 28 Best Screenplay Oscars.

In October of 2012, the Black List launched a unique online community where screenwriters make their work available to readers, buyers and employers. Since its inception, it has hosted more than 70,000 screenplays and teleplays and provided more than 120,000 script evaluations. As a direct result of introductions made on the Black List, dozens of writers have found representation at major talent agencies and management companies, as well as sold or optioned their screenplays. Several films have been produced from scripts showcased on the website including Golden Globe nominated NIGHTINGALE, starring David Oyelowo, and Amazon’s HONEY BOY, written by Shia Lebeouf.

Currently, the Black List hosts over 3,000 by nearly 2,700 writer members, available for download by industry professionals ranging from agency assistants, to studio and network presidents, to A-list actors and directors.

As the largest minority group on the planet—and as the only minority group that anyone can join at any point of his or her life—the disability community is a robust, diverse, and integral part of our global fabric. The Media Access Awards (MAA) celebrate this fact by honoring, highlighting, and promoting disability and its depictions in film, television, and new media.

The Media Access Awards aim to recognize depictions of disability in media that are accurate, inclusive, and multi-faceted. Our awards ceremony honors those industry professionals who have advanced disability-related narrative in fields including writing, producing, casting, performance, and directing. We are proud and pleased to be at the forefront of creating and promoting opportunities for some of the brightest talents in the industry.

The MAA works with organizations, producers and studios to create opportunities for artists with disabilities.  In 2019 the MAA created the first Best Practices Guide for Employing Writers With Disabilities.  The guide was part of the showrunners program at the WGAW and is widely used by the entertainment industry.

In 2020 the MAA launched a series of interviews with disabled writers, producers, actors, and directors on social media platforms addressing such topics as the need of greater representation in media. The MAA stays active throughout the year through panels, workshops and seminars.

For more than 100 years, Easterseals has been an indispensable resource for individuals with developmental disabilities or other special needs and their families. The services provided by Easterseals Southern California (ESSC) – in Los Angeles, Orange, San Diego, Imperial, Kern, San Bernardino, Riverside and Ventura counties – make profound and positive differences in people's lives every day, helping them address life’s challenges and achieve personal goals so that they can live, learn, work and play in our communities. With 2,800+ employees, 60+ service sites and hundreds of community partnership locations, ESSC assists more than 13,000 people, providing adult/senior day services; autism therapy; child development/early education; employment services, veteran employment support; independent living options; and more. Join Easterseals in changing the way the world defines and views disabilities at www.easterseals.com/southerncal

ABOUT THE WRITERS GUILD OF AMERICA WRITERS WITH DISABILITIES COMMITTEE

The WGA Writers with Disabilities Committee seeks to enhance the visibility and employment of writers with all types of disabilities, and encourage, celebrate, and endorse accurate portrayals of the disabled in all areas of the media. We also serve as an expert resource for all issues related to the disabled community.