Annual Film Challenge Celebrates Inclusion in the Entertainment Industry; Winners to be Announced May 9 at Sony Pictures Studios 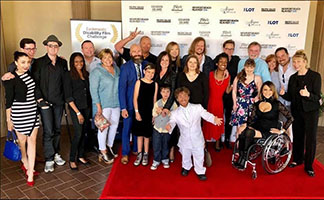 Easterseals, the leading disability services organization, announced the finalists of the 2019 Easterseals Disability Film Challenge on Saturday at the Newport Beach Film Festival, followed by a screening of the films and a Q&A with some of the finalists. Now in its sixth year, the Film Challenge empowers filmmakers with or without disabilities to collaborate and tell unique stories while providing opportunities for inclusion and representation for the world’s largest minority group.

Teams participating in the challenge had 55 hours to write, shoot and edit a three-to-five-minute short film based on an assigned genre. The competition took place April 5-7, during which more than 200 people with disabilities participated either in front of or behind the camera. Excitement and participation in the annual challenge is growing as this year’s competition saw a 22 percent increase in submissions from the prior year, and entries from three different countries.

“The goal is to expand the conversation surrounding disability inclusion and provide a platform for the many talented members of the disability community to create authentic content,” said Mark Whitley, CEO, Easterseals Southern California. “Through the Easterseals Disability Film Challenge, participants have a chance to showcase their talents, creating a pipeline that will directly lead to increased inclusion.”

The winners of the annual competition will be announced at a red-carpet ceremony at Sony Pictures Studios on May 9. Based on the category, winners will receive a mentorship opportunity with  producer and President of SK Global John Penotti (“Crazy Rich Asians”), CBS Entertainment’s Tiffany Smith Anoa’i, Academy Award-winning writer, director and producer Phil Lord (“Spider-Man: Into the Spider-Verse,” “The Lego Movie,” “21 Jump Street”), or Pam Dixon, casting director (“Angels in the Outfield,” “City Slickers”). Other prizes include the latest in computer technology from Dell, the opportunity to screen their film at the HollyShorts Film Festival, a $2,000 production grant provided by Universal Filmed Entertainment Group, a Sony a6400L camera kit and more.

“We could not be prouder of the amazing films we received this year. The stories our judges reviewed spoke volumes about inclusion and really showcased the power of collaboration at its finest,” says Nic Novicki, actor and founder, Easterseals Disability Film Challenge. “I personally cannot wait for the world to see the talent that the disability community has to offer in telling valued stories that open doors for us all.”

ABOUT THE EASTERSEALS DISABILITY FILM CHALLENGE
As someone with a disability, actor, comedian and producer Nic Novicki launched the Disability Film Challenge in 2013 in response to the under-representation of talent with disabilities both in front of and behind the camera.  Novicki created the challenge to give aspiring filmmakers the opportunity to showcase their work and provide them with meaningful exposure. In 2017, Novicki joined forces with Easterseals Southern California – the nation’s leading nonprofit supporting people and families with disabilities – to expand the event, now known as the Easterseals Disability Film Challenge. Learn more at www.DisabilityFilmChallenge.com and join the conversation at Facebook.com/DisabilityFilmChallenge.

ABOUT EASTERSEALS SOUTHERN CALIFORNIA
For 100 years, Easterseals has been an indispensable resource for individuals with developmental disabilities or other special needs and their families. The services provided by Easterseals Southern California (ESSC) – in Los Angeles, Orange, San Diego, Imperial, Kern, San Bernardino, Riverside and Ventura counties – make profound and positive differences in people's lives every day, helping them address life’s challenges and achieve personal goals so that they can live, learn, work and play in our communities. With 2,800+ employees, 60+ service sites and hundreds of community partnership locations, ESSC assists more than 13,000 people, providing adult/senior day services; autism therapy; child development/early education; employment services, veteran employment support; independent living options; and more. At Easterseals, 88% of our income is spent on services. Join us in changing the way the world defines and views disabilities at easterseals.com/southerncal and www.wecelebrate.org.