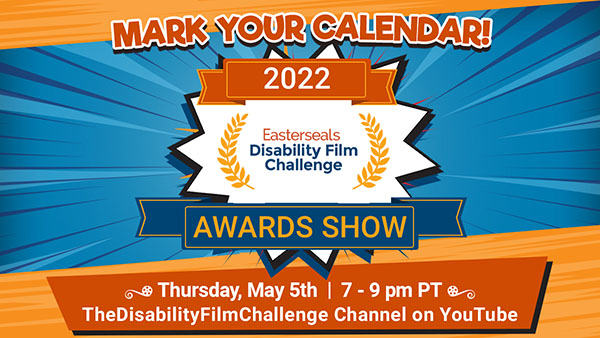 Nonprofit disability services provider and resource Easterseals Disability Services announced today that Paul Raci (Sound of Metal), Rick Glassman (As We See It),  Sue Ann Pien (As We See It), Albert Rutecki  (As We See It), Max Borenstein (Winning Time: The Rise of the Lakers Dynasty), Blake Stadnik (This is Us), Ryan O’Connell (Special) and producers Phil Lord and Chris Miller (Spider-Man: Into the Spider-Verse) will be among the stars who will present at the 2022 Easterseals Disability Film Challenge Awards Ceremony which will be held in person on Thursday, May 5, 2022, at Sony Pictures Studios’Cary Grant Theater.

The 2022 Film Challenge received a record-breaking number of submissions of 95 films from the U.S. and countries across the world. Finalists will be announced on April 29 narrowing the films down to four in each of the following categories: Best Film presented by Warner Bros. Discovery, Best Director presented by NBCUniversal, Best Editor presented by Adobe, Best Actor presented by IMDbPro, Best Writer presented by Netflix and Awareness Campaign Award presented by Prime Video.

Created in 2013 by Nic Novicki and launched in 2014, the challenge gives filmmakers – with and without disabilities – the opportunity to collaborate to tell unique stories that showcase disability in its many forms, inviting aspiring storytellers to creatively write, produce, and complete short films.  The week-long filmmaking contest, open to all, provides a platform for new voices in the entertainment industry.

Previous Easterseals Disability Film Challenge winners and participants have gone on to achieve great success within the industry, landing roles in major television shows and films including New Amsterdam, Superstore, The Good Doctor, Loudermilk, Marry Me and Moxie, and earning accolades and grants from prestigious organizations all around the world!

Winners of the Easterseals Disability Film Challenge receive invaluable access to entertainment, opening the door to an industry notoriously difficult to enter, as well as a variety of prizes to help them achieve their career goals:

To stay in the know on all things related to Disability Inclusion, follow:

About the Easterseals Disability Film Challenge

As someone with a disability, actor, comedian and producer Nic Novicki launched the Disability Film Challenge in 2013 in response to the under-representation of talent with disabilities both in front of and behind the camera. Novicki created the challenge to give aspiring filmmakers the opportunity to showcase their work and provide them with meaningful exposure. In 2017, Novicki joined forces with Easterseals Southern California – the nation’s leading nonprofit supporting people and families with disabilities – to expand the event, now known as the Easterseals Disability Film Challenge. Learn more at www.DisabilityFilmChallenge.com.

Easterseals is leading the way to full equity, inclusion and access through life-changing disability and community services. For more than 100 years, we have worked tirelessly with our partners to enhance quality of life and expand local access to healthcare, education and employment opportunities. Easterseals Southern California provides essential services and on-the-ground supports to more than 15,000 people each year—from early childhood programs for the critical first five years, to autism services, daily and independent living services for adults, employment programs, veterans’ services and more. Our public education, policy and advocacy initiatives positively shape perceptions and address the urgent and evolving needs of the one in four Americans with disabilities today. Together, we’re empowering people with disabilities, families and communities to be full and equal participants in society.