Participants can register at DisabilityFilmChallenge.com now through Friday, March 13th for regular deadline and Tuesday, March 31st for late registration. 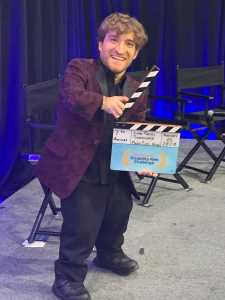 “The entertainment industry is notoriously difficult to break into, regardless of your ability. And, as a person with a disability, I know the odds are stacked against people with disabilities to build careers in entertainment,” says Nic Novicki, actor and founder, Easterseals Disability Film Challenge. “I set out to change this, giving filmmakers and actors tangible work experiences and a chance to tell more diverse and varied stories that better represent the real world. Through the Challenge, and thanks to Easterseals’ year-round efforts to expand the diversity conversation, disability is gaining representation in front of and behind the camera.”

The Easterseals Disability Film Challenge, now in its seventh year, gives filmmakers the opportunity to collaborate and tell unique stories that showcase disability in its many forms. The film competition is open to anyone, with or without disabilities, and will take place over the weekend of April 3-5. Participants will have roughly 55 hours to write, shoot and edit a three-to-five-minute short film based on an assigned genre. While the filmmakers are not necessarily required to include disability in the storyline, each team must include at least one person with a disability in front of or behind the camera.

“Because we rarely see characters with disabilities in storylines, it’s easier for society to stereotype and marginalize,” said Mark Whitley, CEO, Easterseals Southern California. “Hollywood is galvanizing around the Easterseals Disability Film Challenge to embrace disability inclusion and better reflect the nation’s largest minority population, 61 million strong. Together we can shift perceptions, tackle stigmas and advance social change. And, while we’re beginning to see bright spots and progress, we still have work to do.”

The genre, locations and themes for the 2020 Challenge will be released Tuesday, March 31, 2020, with the remainder of the assignment released Friday, April 3, 2020. Submitted films are judged in five award categories – Best Film, Best Director, Best Actor, Best Screenplay and Best Awareness Campaign – and judged by a diverse group of entertainment industry professionals. Since the Challenge launched, filmmakers from around the world have created more than 200 films that have been viewed online and at festivals such as the HollyShorts Film Festival, Heartland Film Festival and Bentonville Film Festival.

Since the Challenge launched in 2013, there have been several success stories resulting from support received as a part of the Challenge. Jamie Brewer, who won Best Actor in the 2017 Challenge for Whitney’s Wedding, has been acclaimed for her role on “American Horror Story,” and was the first model with Down Syndrome to walk the runway at New York Fashion Week. Dickie Hearts, the Challenge’s Best Filmmaker winner in 2015, went on to win a HBO Project Greenlight digital series competition. Jenna Kanell, winner of Best Film in 2015, went on to give a TEDx Talk about her experience.  Sofiya Cheyenne was cast in “Loudermilk” after writer-director Peter Farrelly saw her 2018 Challenge entry, “You’re Up.” 2019 Best Film nominee Santina Muha has a comedy in development at CBS and 2019 Best Actor winner Nicole Lynn Evans appears in a recurring role on Freeform’s “Good Trouble.”

Sony Pictures Entertainment, as the official Red Carpet Sponsor, will host the Awards Ceremony. Based on the category, winners have the opportunity to receive the latest in computer technology from Dell, the opportunity to screen their film at the HollyShorts Film Festival, mentorship opportunities and cash prizes.

Registration for the 2020 Easterseals Disability Film Challenge is now open. To sign-up, view the official rules, or for more information, please visit DisabilityFilmChallenge.com.

As someone with a disability, actor, comedian and producer Nic Novicki launched the Disability Film Challenge in 2013 in response to the under-representation of talent with disabilities both in front of and behind the camera.  Novicki created the challenge to give aspiring filmmakers the opportunity to showcase their work and provide them with meaningful exposure. In 2017, Novicki joined forces with Easterseals Southern California – the nation’s leading nonprofit supporting people and families with disabilities – to expand the event, now known as the Easterseals Disability Film Challenge. Learn more at https://disabilityfilmchallenge.com/and join the conversation at Facebook.com/DisabilityFilmChallenge.

For more than 100 years, Easterseals has been an indispensable resource for individuals with developmental disabilities or other special needs and their families. The services provided by Easterseals Southern California (ESSC) – in Los Angeles, Orange, San Diego, Imperial, Kern, San Bernardino, Riverside and Ventura counties – make profound and positive differences in people's lives every day, helping them address life’s challenges and achieve personal goals so that they can live, learn, work and play in our communities. With 2,800+ employees, 60+ service sites and hundreds of community partnership locations, ESSC assists more than 13,000 people, providing adult/senior day services; autism therapy; child development/early education; employment services, veteran employment support; independent living options; and more. At Easterseals, 88% of our income is spent on services. Join us in changing the way the world defines and views disabilities at easterseals.com/southerncal.