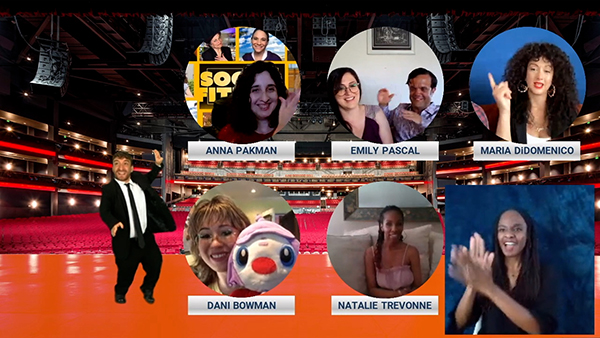 Tonight, nonprofit disability services provider and disability inclusion resource Easterseals Southern California hosted the 2021 Easterseals Disability Film Challenge  Awards Ceremony powered by Microsoft Teams, honoring the best of this year’s record-breaking applicants to the second “Home Edition” of the annual event.  After receiving 93 submissions from the US and places all across the world including India, The Netherlands, Ireland, Australia, Canada, and more, the films were narrowed down and winners were selected in each of the following categories: Best Film presented by WarnerMedia, Best Director presented by WarnerMedia, Best Editor presented by Adobe, Best Actor presented by IMDbPro, and Awareness Campaign Award presented by ViacomCBS.

The night kicked off with an exciting virtual orange carpet hosted by Sofiya Cheyenne and Nicole Lynn Evans and featuring some of the night’s nominee, presenters, and more.  During the virtual ceremony, Michelle Buteau (Welcome To Buteaupia), Matthew Jeffers (New Amsterdam), Ryan O’Connell (Special), Paul Raci (Sound of Metal), Millicent Simmonds (A Quiet Place), and Ali Stroker (Oklahoma!) joined Easterseals Disability Film Challenge founder Nic Novicki for a joyful celebration of this year’s incredible filmmakers and storytellers.  The evening was filled with heartfelt acceptance speeches as the winners gave special recognition to everyone who made their films possible, especially during these challenging times.

So You Wanna Be an Actor – Rachel Handler

Lights Out and Away We Go – Veerle Ackerstaff

Created in 2013 by Nic Novicki and launched in 2014, the challenge gives filmmakers – with and without disabilities – the opportunity to collaborate to tell unique stories that showcase disability in its many forms, inviting aspiring storytellers to creatively write, produce, and complete short films.  It is a week-long filmmaking contest, open to all, that provides a platform for new voices in the entertainment industry.

Winners of the Easterseals Disability Film Challenge receive invaluable access to entertainment professionals, opening the door to an industry notoriously difficult to enter, as well as a variety of other priceless gifts to help them achieve their career goals:

Previous Easterseals Disability Film Challenge winners and participants have gone on to achieve great success within the industry, landing roles in major television shows and films including New Amsterdam, Superstore, The Good Doctor, Loudermilk, Marry Me, and Moxie, and earning accolades and grants from prestigious organizations all around the world!

Easterseals Southern California has also recently launched its “Easterseals in Entertainment” website and resource center.  The site highlights Easterseals’ ongoing initiatives, which aim to change the way the world defines and views disability, using the Entertainment industry as an incredibly powerful tool to do so.  The site also serves as a resource center, offering tools for finding actors and creators within the disability community, providing a Best Practices Guide for writers looking to bring authentic disability representation to their work and writers rooms, and much more!  Visit https://eastersealsinentertainment.org/.

To stay in the know on all things related to Disability Inclusion, follow:

About the Easterseals Disability Film Challenge

As someone with a disability, actor, comedian and producer Nic Novicki launched the Disability Film Challenge in 2013 in response to the under-representation of talent with disabilities both in front of and behind the camera. Novicki created the challenge to give aspiring filmmakers the opportunity to showcase their work and provide them with meaningful exposure. In 2017, Novicki joined forces with Easterseals Southern California – the nation’s leading nonprofit supporting people and families with disabilities – to expand the event, now known as the Easterseals Disability Film Challenge. Learn more at www.DisabilityFilmChallenge.com.

For more than 100 years, Easterseals has been an indispensable resource for individuals with developmental disabilities and their families. The services provided by Easterseals Southern California (ESSC) – in Los Angeles, Orange, San Diego, Imperial, Kern, San Bernardino, Riverside and Ventura counties – make profound and positive differences in people's lives every day, helping them address life’s challenges and achieve personal goals so that they can live, learn, work and play in our communities. With 2,800+ employees, 60+ service sites and hundreds of community partnership locations, ESSC assists more than 14,000 people, providing adult/senior day services; autism therapy; child development/early education; employment services, veteran employment support; independent living options; and more. Join us in changing the way the world defines and views disabilities at www.easterseals.com/southerncal.