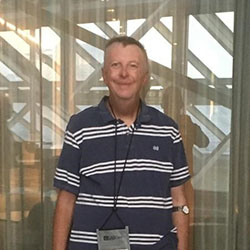 Howard McBroom has been articulate and passionate about several important issues since he was very young, but he hasn’t always been as outspoken as he is today. As an associate for Easterseals, Howard has really come into his own, advocating on behalf of himself and others with disabilities, and serving as a motivational speaker about his experiences with autism, disability advocacy and more.

When Howard was a young adult, he struggled with bullying, social isolation and an unstable family environment, which has given him great insight into advocating on behalf of others with disabilities and who have had similar experiences. In addition to talking to elected officials and speaking at conferences on behalf of Easterseals, Howard teaches an advocacy class to ESSC Adult Day Services participants in Glendale twice a week. The class aims to help individuals gain more confidence speaking up for themselves and self-advocating, as well as advocating for their peers who may not be able to do so.

“We teach advocacy, Person-Centered planning, and we talk about compassion and respect,” Howard said. The Person-Centered Approach employed throughout Easterseals’ ADS programs empowers people to pursue what's important to them, and allows individuals to direct their days including how, where, and with whom they spend their time, and what volunteer work they do.

“As advocates, we need to talk to people and tell them what we need, why we need it and how it will benefit them to give it to us,” Howard added. “I’ve met with several state representatives up in Sacramento. I tell them what our story is, who we are and what we’re all about. And why compassion is so important.”

Several ADS participants look forward to Howard’s class each week. Many engage in discussion with him and ask questions, and some have become noticeably more outspoken since they began attending the class a few months ago. “People are speaking out and becoming more outgoing, and they’re responding better to people,” Howard observed.

ADS participant Darlene attends the class on a regular basis and hopes to accompany Howard on an upcoming trip to meet with legislators in Sacramento. “I like it—I learned a lot,” Darlene said of the class. “It helps me to get it all out. I want to do more advocacy. I want to advocate for other people and show the world how I advocate for myself.”

ADS participant Sona makes a point of arranging her schedule so she can attend the advocacy class each week. During a recent class, Howard offered Sona encouragement and told her she would make a terrific advocate. Since she began attending the class a few months ago, her coaches have noticed that she has learned to be more independent and speak up about how she wants to spend her days. Sona also asked to enroll in college extension classes in typing and reading.

Howard became involved with Easterseals through its Peer-to-Peer social group, which gives people to the opportunity to connect with other active members of the disability community, meet about relevant issues, and plan and participate in fun activities around Southern California. It was there Howard’s passion for expressing himself and persuasively speaking out on behalf of others was first noted.

“Howard delivers messages from the heart – there’s nothing scripted and that’s why it really impacts people,” said ADS Program Director Brian Nguyen. “Whatever the topic is, he hits the nail on the head. His experience and knowledge make him a great teacher. He really focuses on the individuals understanding themselves first and then advocating for others. He gets the best out of people.”

In his role as advocate Howard is uniquely positioned to teach the class. “I straddle two worlds,” Howard explained. “I had trouble understanding social cues in high school. I can sort of interpret for both worlds. I enjoy being an Easterseals advocate because I can help change attitudes and beliefs, convey information to people, talk about compassion and why it’s so important. People who don’t initially appear to be capable might be very capable.”