Home > _Easterseals Midwest > Who We Are > Board of Directors 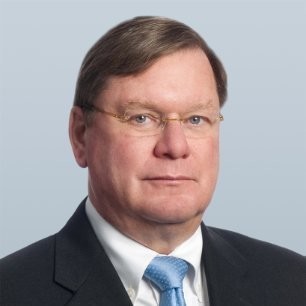 Ed represented start-up and established franchisors - most often in the hotel and real estate brokerage industries - in all legal issues that develop in licensed networks. Ed was national counsel for two of the world's largest franchisors, representing 25 of the most famous 200 brands, and is the Outside General Counsel to one of the best-known healthcare nonprofits, as well as a leading liberal arts college.

Ed was formerly admitted to practise in more than a dozen jurisdictions, served in the U.S. Army, and was a former multi-term Chair Worldwide of Litigation, Arbitration and Dispute Resolution for Lex Mundi, the World's Leading Association of Independent Law Firms.

Ed has been continously active as an Easterseals volunteer since 1983, including Missouri Easterseals Chairman of the Board, and Edgar Allen Award recipient; twelce years on National Easterseals Board of Directors, includin service as Chair of every standing committee, many ad hoc committees, all officer positions except Chair, and served on the executive committee under three National Presidents, as well as service on the Alaska, Utah, and Nebraska Boards of Directors; former Outside General Counsel to National Easterseals for a decade, and provided legal representation to more than two dozen Easterseals affiliates.

Ed lives in Kansas City with his wife, Suzy. They have two adult children, T.J., who lives in Brooklyn, New York, and worked for National Easterseals Headquarters in Chicago while attending Northwestern, and Tess, who lives in Maui, Hawaii, and has both undergraduate and graduate degrees from the Rhode Island School of Design. All are avid Kansa City Royals and Chiefs fans. Suzy had two holes-in-one in four days, and she, Tess, and Ed have beel to all seven continents.

To learn more about our programs at Easterseals Midwest,
please contact us at 1-800-200-2119 or info@esmw.org.