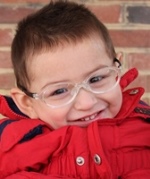 For most families, the birth of a child is a joyous occasion. For his family, Mikey’s birth was a day of emotional struggle, and fear of the unknown. Mikey was born dead. He was resuscitated and placed on life-support. The next day doctors encouraged his father, Mike, to baptize Mikey. They believed he would most likely not make it through the night, and if he did he would retain severe brain damage.

DONATE NOW to give other children like Mikey a second chance.