Why is Medicaid Important for People with Disabilities?

Created in 1965, Medicaid is jointly funded by states and the federal government. States design their Medicaid programs to provide federally mandated services in addition to services or special populations that are a priority in the state. Federally-mandated services are directed to both children and adults based on specific eligibility criteria and include hospital services, home health care, laboratory and x-ray services, and nursing home care.

Why is Medicaid so important for individuals with disabilities?

Individuals with disabilities, especially those with chronic health conditions, can require medical and long-term care to maintain their health, independence and well-being.

One in eight Medicaid enrollees (or about 11 million Americans) is an individual with disabilities.  Medicaid services such as attendant care, home health, adult day and prevocational services help individuals with disabilities remain in their home and communities and live productive lives.

Some states offer Medicaid Buy-In programs that allow individuals with disabilities who are working to retain their needed health care coverage while earning above the regular Medicaid income limits.  Prior to the Affordable Care Act, Medicaid was the only available insurance program that included the benefits that people with disabilities needed to support their health. 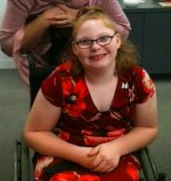 Millions of children with disabilities, like Shannon, benefit from the health care and community-based supports available through Medicaid.

Born with cerebral palsy, Shannon began receiving physical and occupational therapies at the age of two to help her walk, learn and take care of her personal needs— things her doctors never thought possible.

Today, because of her hard work and access to Medicaid-funded services and related surgeries Shannon received through Easterseals and other Medicaid providers, Shannon is a successful high school student preparing for graduation while working part-time in the community. Her success allowed her mother, who was her full-time caregiver, to return to work.

How do block grants and per capita proposals jeopardize critical services?

Congressional proposals to convert Medicaid financing from an entitlement program into a state block grant or per capita allotment program would dramatically alter the program and negatively impact individuals with disabilities who meet the program’s eligibility.

The current Medicaid structure entitles eligible individuals to core services and, in turn, guarantees states to federal matching payments with no cap to meet program needs of eligible residents.

The block grant proposal would shift Medicaid program costs to states and put Medicaid beneficiaries, including individuals with disabilities, at risk for services.

Under a block grant, federal Medicaid funding to states would be capped, eliminating the current entitlement structure that allows federal funding to respond to changing program needs, such as recessions, epidemics or disasters. This lack of federal funding flexibility would be passed on to states, who — based on their own financial restrictions — may be forced to limit or end current services to reduce costs. A block grant would also likely end the federal core service components that are required in turn for the federal match.

The per capita proposal

The per capita proposal would limit the federal government’s reimbursement to states based on a per-enrollee amount. If state Medicaid costs per enrollee increase, due to health care inflation, epidemic or other health circumstance, these costs would shift solely to states given the federal reimbursement is capped. Reductions in critical services to individuals with disabilities and other Medicaid beneficiaries or higher program premiums would be likely cost-reduction strategies, especially for states that have limited revenue flexibility.

The Impact of Medicaid Funding Cuts:

Easterseals locations partner with their state’s Medicaid agency to provide home and community-based services to eligible individuals with disabilities.

Easterseals respectfully asks Congress to protect Medicaid and its life-saving services for people with disabilities by: