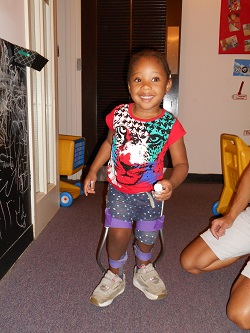 If you ever catch Jalea at the local grocery store, you’ll find this bubbly 3-year-old performing the ABC song for all to hear. For Jalea, progress is something to sing about, loud and proud.

Jalea was born with spina bifida and hydrocephalus. Doctors told her mom, Kiara, that there was only a possibility that she would be able to walk independently, but there was no way of knowing. No guarantee.

“When the doctors said spina bifida, I immediately went to Google,” Kiara said. “I never knew of anyone with the condition.”

When Jalea was 1-year-old, a friend recommended Easterseals as both an option for daycare and therapy.

“I jumped at the opportunity,” Kiara said. “I felt that the biggest and best thing was to get her therapy at her daycare.”

With Easterseals centers embedded throughout communities, Kiara felt that convenience that so many parents need. Especially exciting about this Easterseals children's center was that it was right next to the school where Kiara is a full-time student.

At the childcare center at the Easterseals UCP North Carolina & Virginia location, Jalea is learning not only building blocks like her ABCs, but also how to move independently. 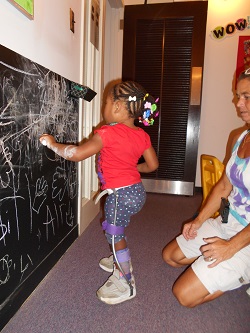 Since attending Easterseals, Jalea has made significant progress toward milestones.

“She started working on different milestones like crawling, then cruising. Once she mastered cruising then they got her in her braces and twister cables. She had a walker and then she progressed from walker to crutches and she’s just been getting better and better ever since she’s been there,” says Kiara.

These goals and milestones have been possible because of the collaboration between Kiara and the physical therapy team at Easterseals. While the staff at Easterseals take the lead on developing these goals, Kiara is involved every step of the way.

After just 2 years of therapy, Kiara welled with joy, and relief, when she saw Jalea take her first independent steps.

“I was completely overjoyed. I was just so excited because in my mind I was thinking I don’t know how long it’s going to take for her to reach these milestones,” Kiara said. “If she took a little longer than some of the other kids, I would get discouraged, but once she did it – you can’t slow her down, and it makes me so excited and happy.”

Kiara added that while Jalea may take a few steps at home, fall and then laugh about it – like any newbie at walking – when she’s at school, it’s all business. “Daycare is like her job,” she said.

Beyond the Physical Milestones 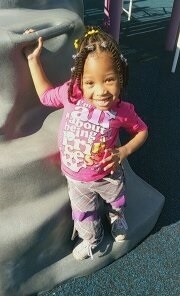 In addition to her progress in reaching milestones, Jalea is also learning her letters and numbers. Kiara said they’re working on spelling out her name, and so far have the J and the A.

As Jalea grows, Kiara said she hopes she remains this happy-go-lucky person, and continues to be motivated throughout life.

For other parents considering Easterseals, she offered the following advice: Go for it!

“I would not run anyone away from Easterseals. I really, really love [it].”

And Kiara is working with Easterseals on Jalea’s next big goals. In fact, Kiara hopes Jalea will soon walk without her assistive devices. In the meantime, though, she remains astounded by the progress her little girl has made.

“She amazes us every day.”

Discover the ABCs of choosing the best childcare