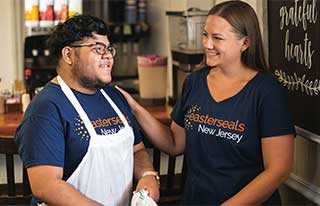 When young Angel first came to Easterseals in 2015 for employment training he was anxious and open about his goals, the first of which was to pass his drivers exam. He connected quickly with staff and was steadily on his way to acquiring his driver’s permit and achieving other ambitions on his list. Unfortunately, life had other plans for Angel. He began to experience depression and suicidal thoughts on a regular basis. He also found himself the victim of domestic violence in his residence. Because of the open relationship he had with his service specialist at Easterseals he was able to share his struggles and receive guidance and support. Acting quickly, his support staff were able to successfully assist him in finding a new place to live.

Shortly after moving into a different family member’s home, Angel’s physical health declined. A significant thyroid condition quickly progressed and impacted Angel’s heart, lungs, energy level, and motivation. At Easterseals one afternoon, Angel began to feel very ill and stated “I cannot take it anymore.” Emergency personnel were contacted and Angel was to spend the next month in the hospital for his condition. When finally released, Angel still required oxygen 24 hours per day due to the damage done to his lungs.

After several weeks of rest at home, Angel happily returned to Easterseals more motivated than ever to work hard, improve his skills, and obtain community employment. He met with his career exploration coordinator to discuss his employment plans and began job sampling soon thereafter. Angel loved being out in the community and getting to meet new people – it had a wonderfully positive impact on his physical and mental health. Angel’s enthusiasm was noticeable and well received. After only 5 weeks of job sampling with Verna’s Flight Line Café in Millville, he was offered a job!

The Future is Looking Bright

Now, after earning his first paycheck from an integrated employment site, Angel is looking forward to his future and developing additional skills in the hospitality industry. Although his mental and physical health conditions initially posed a significant barrier
to employment, Angel’s triumphant spirit paired with a dedicated team of Easterseals employees proved that employment is attainable for anyone with the right supports and a commitment to pursuing their goals.