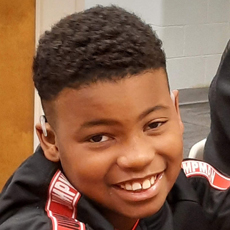 Easterseals has been in Diamond Carter’s life since she was two years old. Now, YOUR generous support is also changing the life of her son Evan Carter! Just like his mom, Evan was born with severe to profound hearing loss. He entered a silent world, but that soon changed. An entire team of caring Easterseals professionals became a part of Evan’s life almost immediately.

As a baby, Evan quickly received hearing aids, audiology services, and speech therapy. “It was very important that everyone on his team worked together on his development,” Diamond said. Those Easterseals services – services that YOU make possible – were Evan’s first important steps on the road to communicating!

Therapies intensified after Evan received his first cochlear implant at 18 months of age. The same Easterseals therapist who had helped Diamond years ago taught Evan to make sense of the new sounds he was hearing. By age two, Evan was beginning to talk!

Your support allowed Easterseals to be here for Evan as he grew. Evan attended the Mitchell Therapeutic Preschool, where he reached developmental goals with the same teachers who had taught his mom. His progress continued with early care and education at Easterseals Milestones. The family connection continued there, too – Evan’s grandmother Monich is a Milestones pre-k teacher!

Generosity like yours enabled Evan to improve his speech even more after his second cochlear implant at age 5. The highly specialized, ongoing services he receives each week make a world of difference. Now nine years old, Evan and his therapist focus on more advanced language skills. His hard work will help him succeed in fourth grade and beyond.

“I want him to be successful in his journey like mine,” Diamond said. Your support of Easterseals makes that success possible. “Now having a second generation makes our Easterseals story unique, because without it, I don’t know where we would be,” Diamond explained. With Easterseals? “We overcome any challenges that come our way!”

Because of caring people like YOU, Easterseals will be here to provide life-changing services as long as the Carter family needs them. On behalf of Evan, Diamond, and everyone at the Easterseals Rehabilitation Center, we say THANK YOU!