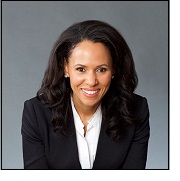 Elected to the Easterseals National Board of Directors in 2019, Anderson serves as a member of the Development and Marketing Committee and the Public Policy Committee.