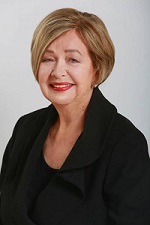 Nancy Goguen’s service to Easterseals began in 2005 as a volunteer board member at Easterseals New Jersey, eventually acting as Chairman of the Board from 2009 to 2013. She was drawn to Easterseals because of its mission and deepened her involvement because of the spirit of collaboration within the nationwide organization. At the national level, she served on the Membership & Organizational Structure (MOS) Committee for a number of years, including two as chairman, as house regional liaison and as a member of the House of Delegates.

Elected to Easterseals Board of Directors in November 2010 and re-elected in 2013, Ms. Goguen served as board secretary, chairman of the Public Affairs Committee, and as a member of the Executive and House Nominating Committees. In 2016, Ms. Goguen was elected to serve as an honorary member and served on the Finance and Public Policy Committees. The following year, Ms. Goguen acted as Chair of the CEO Search Committee.