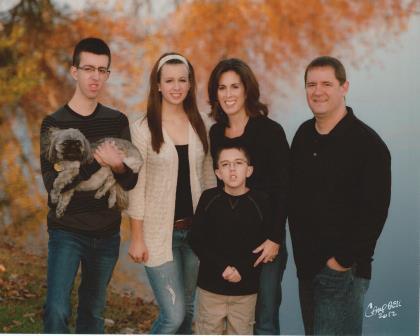 From left: Ryan, Emily, Justin, Theresa and her husband

“I always thought our story was unique,” says Theresa Forthofer, mother of three and president and CEO of Easterseals in DuPage County, Illinois. In the months following her oldest son Ryan’s birth in 1993, she suspected that he wasn’t keeping up with his peers developmentally. Concerned, she and her husband asked their pediatrician and other doctors about his development, and they were assured over and over for several years that he was fine. Boys don’t develop as quickly as girls, they were told.

As a first-time mom, Theresa says she hadn’t had enough time around other young children to understand the benchmarks for developmental milestones—what’s typical, when to be patient and when to take action. “We knew very few people could understand Ryan when he talked, but we always could. We didn’t have an assessment tool like the Ages & Stages Questionnaire® then either.”

Years passed. The Forthofer’s daughter Emily was born, and they noticed her development was more typical than Ryan’s. Still, their concerns weren’t validated until Ryan started school. At age 7, Ryan was finally diagnosed with myotonic muscular dystrophy (MMD), a genetic muscle disease.

“I was 7 months pregnant with my third child, Justin, by then, so we knew what to look for. Once Justin was born, we noticed he had ‘floppy’ muscles and quickly learned he also had MMD with a simple blood test,” says Theresa. While Ryan started receiving therapy at age 7, his brother began early intervention when he was just weeks old.

A few years later, both Justin and Ryan were also diagnosed with autism spectrum disorder (ASD). Justin was diagnosed with a more challenging form of ASD, but early intervention and continued therapy at Easterseals helped develop his communication and social skills, and the results have been long-term. While Justin is more impacted by both MMD and ASD than his brother, the advantages of early intervention have helped him immensely. He's more social than his brother and more willing to try new things. He has friends and is actively involved in school and community activities.

As Justin, 14, prepares to start high school in the fall of 2014, Ryan, 21, is attending a post-high school special education vocational program. “We are beginning to realize how limited services are for kids once they reach age 22, and that is a big focus for us these days—what will Ryan do when he ages out of the school’s programs?”

Today, Theresa’s passion is helping families get the support they need to give their children the best start possible in life. With Theresa and many others, Easterseals is also committed to helping people with disabilities find jobs.

“I’m incredibly passionate about the Make the First Five Count campaign because, unfortunately, my story isn’t unique after all. It’s one I hear too often,” she says. “I encourage every parent to take the Ages & Stages developmental milestone screening. The difference early diagnosis and early intervention can make is so clearly visible in my two boys. I wish I would’ve been able to take the screening to understand and support my concerns. Even with my daughter, who is a very typical teenager, I would’ve felt a great sense of relief by taking the screening and knowing she was developing typically.”

More stories of the difference early intervention therapies can make from birth to adulthood.