By the time Daysi Jimenez’s son Ben was 18 months old, she was starting to feel uneasy about his development. “He could say words, but they weren’t meaningful—he was just echoing back to me.” 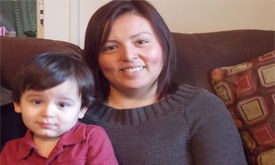 Jimenez mentioned her concerns to Ben’s pediatrician, who attributed his speech delays to being raised in a bilingual household. But after the birth of Ben’s brother six months later, Jimenez became more concerned about Ben’s behavior. “He was constantly spinning, jumping, and running around,” she recalls. “I knew that Ben needed help.”

Jimenez reached out to her state’s Birth to Three program, and within a month Ben began receiving speech and occupational services from Easterseals.

Ben was diagnosed with PDD-NOS. “I had already suspected Ben had autism, but I wanted to believe it was something else,” she said. Jimenez and her husband worked closely with Ben’s speech language pathologist, Heather, to help develop his language skills. “Heather taught us how to engage with Ben through play,” she explains. Within six months Ben was able to communicate in sentences. Now four years old, he continues to work hard and is making enormous progress.

Jimenez knows the future is bright for her family. “Before we started working with Easterseals, our life was so stressful and everything felt so chaotic,” Jimenez says. “It feels like we lived through a really bad thunderstorm, and now we get to see the rainbow.”

Looking back, Jimenez wishes she had had access to a developmental screener, like the Ages and Stages Questionnaire (ASQ). “The ASQ gives you a sense of how language and fine motor skills should be developing so you can evaluate if your child is developing appropriately,” she explains. It takes just 10 to 20 minutes to complete the questionnaire. The results will help you see if your child’s developmental progress is on schedule and alert you to concerns that you can discuss with your health care provider.