Love and Marriage with a Disability in the Mix 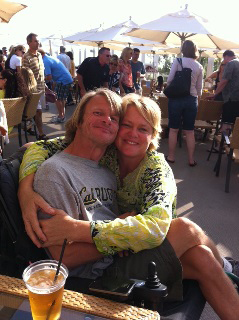 Here, Elizabeth Wampler gives a raw, first-hand account of falling in love with Steve Wampler, who lives with cerebral palsy. Their love is strong through 18 happy years and counting, two kids, and Steve's climbing of El Capitan, the largest rock face in the world.

Steve climbed El Capitan to raise awareness and funds for a summer camp for kids with disabilities, and he did it with the full use of only one limb, his right arm. The camp was inspired by the many summers he spent at an Easterseals camp. His camp experiences helped shape him into the confident, determined sportsman he is today—the man who rocked Elizabeth's world.

The Beginning
By (and about) Elizabeth Wampler

Something felt entirely right from the day I moved to Coronado. There was the new chapter part of it and something about the air and the breezes. I now lived about a minute’s walk from the ocean. A first.

My plan was to find a place, get my bearings, and take it from there. I moved in with a couple, Courtney and Ed, and their kids, Eddie and baby Kiana. I didn’t know it at the time, but my fate was sealed, and Courtney would forever change my life.

As was unlike me, I was still in deep mourning [over a death in my family], so as a result, I wasn’t as social as I was typically. They were nice roommates, however, and I enjoyed my time with them.

Courtney was a masseuse as well as a driver for a friend of hers, Steve Wampler. He was an environmental engineer but was in a wheelchair and couldn’t drive. Every morning and afternoon, she would get Steve to and from work. That’s all I knew. That is until one day when she and I were in the middle of a great chat that we didn’t want to interrupt. She asked me if I wanted to go with her to pick up Steve so that we could continue to talk.

Not that I gave Stephen a second’s thought before I got in the car that day, looking back. I didn’t envision the severity of his disability or his speech impediment or the twitching.

We got to Steve’s office, and Courtney hopped out to get him. I wasn’t thinking about the guy in the chair.

Then he came out and got into his van. I remember, distinctly, my thoughts at that second.
1.    That is a beautiful face.
2.    His suit is fabulous.
3.    Do not let me cry. Are people mean to him? Is he in pain? Is he sick? Is he dying? What is CP? What is MS, MD, CS? Cerebral palsy, what is that? What do any of those initials mean? Which one is which? Get me out of this car!

Stephen and Courtney chatted happily all the way home. I think I stared straight ahead the whole time, with the occasional façade of a giggle in response to a comment to assure Steve and Courtney that I was cool and comfortable. Steve was talking about a date he had been on the night before. He had gone out with a woman who worked as a bird trainer at Sea World. She had gone to his place before they left for the date and had brought a huge bird with her to his home. She assured him that while they were out, the bird would be fine. Instead, he returned to a totally trashed home as well as a traumatized cat.

I couldn’t understand him and felt sorry that he was in a chair. He was beautiful, and I had heard that he was an environmental engineer who had graduated from the University of California at Davis, an excellent school, so I knew he was smart. This was so foreign to me. I didn’t speak disabled. That was it at the time, I was just uncomfortable, and I wanted out of the car. We dropped him off at his home, and went home ourselves. As small as our town is, it never occurred to me that I’d ever see him again.

The people of Coronado are really friendly and welcoming. Before I had been in town even a couple of weeks, I was invited to three dinner parties. They were all great, and I met fantastic people. What shocked me was that Stephen was at all three of these parties! I couldn’t believe it! I would say that there were from 10-16 people at each of the dinners, and as I looked around, I realized that everyone loved him! Loved! Additionally, I was the only one that seemed to be awkward around him.

I was curious at this point. I still didn’t feel comfortable talking to him, but I sure did watch him from the periphery. I stared, really, at everyone around him interacting as though they didn’t see he had a disability. This really made me question myself, and I think it was the first step in me opening up to him a little bit. A tiny bit of fear was subsiding. What I realized later is that I already felt sorry for him and suffered for him so much, that there was no way on earth I was going to risk opening my big mouth on the off-chance that something I might say might hurt his feelings or, God forbid, even offend him. I was sorry for his situation, and I didn’t want to add to it by saying something wrong. I just couldn’t get over how I was the only one in these rooms that had these fears.

What I learned later is that they were so free and easy with Steve because they had allowed themselves to get to know him, Mr. Wonderful, and they adored him as a result. Steve makes it very easy, and has a keen, quick sense of humor and a lack of sensitivity about his disability, and that allows people in. It’s fantastic, but I also realized that [many of] those same people had been like me at one point. They were just further along in the process of having a true friendship [without concern over] his disability. They had had their own trepidations and their own desires to not hurt his feelings. It’s just that they had broken through to the other side, and they were enjoying the fruits of an honest relationship, human to human, as a result. It was fascinating to watch, and I was starting to learn very quickly. I wanted to know more. 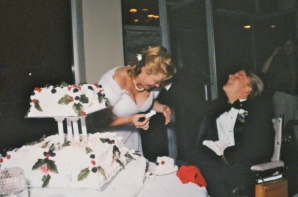 These same people played volleyball in the park on weekends, and they invited me. There he was again, watching volleyball with his friends, and people enjoying each others’ company, Steve included. I braved my first real conversation with him then, and it was great!  After weeks of this, we were friends! I got a massive kick out of him, and we made each other laugh constantly. The friendship grew very, very quickly, and there was a mad connection between us. We shared values and morals. Our upbringings were very similar. We were both naturally happy as people, and again, the humor we shared was fantastic. It was platonic on my part, but I adored his company!

He called me to see if I wanted to meet him at the Hotel Del Coronado. I was quick to say yes, and happy to be seeing him. It was platonic…until I got there and something, everything, changed. In an instant, everything was different. On that night my feelings went from platonic to nothing but.

We spent hours at the Del, and he walked me home. I will never forget it. I walked—no floated—past my roommates on my way to bed. Didn’t sleep one wink that night, and when I did get up the next morning to get the mail, I scared myself. Without realizing it, I had asked myself how he was going to feed the kids! KIDS? What? It was craziness! For one, I had never been crazy with relationships. I had always taken the normal and natural pace with people I had dated. This was unreal. How was I going to navigate this? He had CP, and he was in a wheelchair.

And yet, this was something I wanted. I wanted to be around him and close to him always! I was certain.

After a bit of time passed, I was in the kitchen with my roommate Courtney. She is an old-soul and wise. I knew I had to confide in someone, and I wanted it to be her. So there we were in the kitchen. I mustered the courage, and said, “Courtney, I think Stephen is interested in me romantically.” Without hesitation, she said, “Well, you are just going to have to tell him that you are just going to be friends.” About to lose my nerve, I spit it out and said, “I don’t think I want to tell him I think we should just be friends. I am interested in him too.” To my surprise, a huge grin came over Courtney’s face. She was instantly happy and encouraging. I was sick with relief, and happy to have been able to tell someone. I knew I had a ton to process, and a great deal to think about, but one nod from one person was all I needed at the time to further consider what I was at least thinking about.

The time after that was a bit of a tidal wave. I was done for, and we were together constantly. There were just so many things about him that I adored, that while I might have been denying the gravity of my experiences or the very status of our relationship, time with him just swept away all my concerns. It was a massive rush, and for the first time in my life I understood what I had heard people say about “just knowing when you know.” I knew. I was positive.

During this time, not everything was easy. The romance was easy, but the social image I had was not. I knew I had to be with him, but didn’t know if we would be accepted. What I was taking on was unchartered for me, so I didn’t quite know how I was going to navigate my life with him. It was both an odd and remarkable time. During that time, all I did know was that I had to be with him. 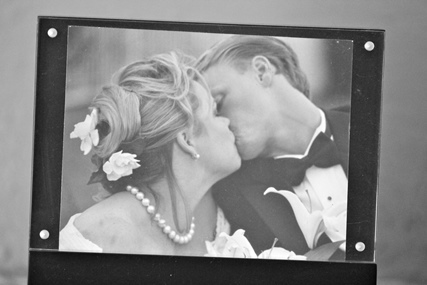 Soon, I started to get used to the chair and the speech impediment. All of it became invisible to me, and that happened pretty quickly.

He took me to a park in Coronado and proposed under a tree. It was wonderful. We were laughing and celebrating, and after a few minutes of not realizing they were there, three young girls jumped out of the tree we were under. They had been up there while he proposed, and didn’t want to interrupt our moment, so had stayed and stayed.

We were married a year later in Coronado in front of 350 family members and friends.

Learn more about the Wamplers and their camp.

Read all of our stories and tips on dating and disabilities.