A Journey with Feeling Different

A journey with feeling different – that’s how Luther Saint-Joy describes his life. Luther’s journey has been marked by social and developmental barriers, by emotional pain, perseverance and courage. It has brought the 23-year-old to the cusp of the fulfilling, independent life he has longed for.

Luther was born and raised in Henrietta New York. He began counseling at Easter Seals New York Diagnostic & Treatment Center in 2010, when he was 18 years old and a recent graduate of Rush-Henrietta High School.  Luther is diagnosed with Autism Spectrum Disorder and Bipolar Disorder. Bonnie Kaplan, a Licensed Clinical Mental Health Counselor with Easter Seals New York, remembers him as shy and withdrawn, a sincere, kind and intelligent young man with a rich imagination and limited social competencies –he didn’t know how to make friends. 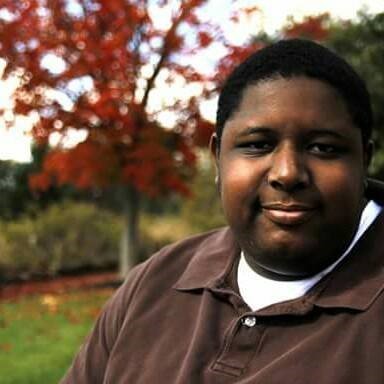 Luther recalls how for years he dreamed of having a birthday party. He saved his money and made elaborate plans, but no party happened.

“I was severely autistic,” Luther said. “People could not understand me. I felt different.”

When Bonnie began working with Luther he was living with his parents, and raised in a manner consistent with their beliefs and culture: children defer to the opinions and decisions of the parents and remain living within the nuclear family until marriage. Cultural pressures to avoid “labels” as well as treatment (mental health counseling, use of psychotropic medicines, residential rehabilitation, Medicaid Service Coordinators and pursuance of more independent housing, etc.) complicated Luther’s social growth and developmentally appropriate autonomy, which was already compromised, as it is for many persons diagnosed with Autism Spectrum Disorder.

Luther’s social activities were severely curtailed, and he was excluded from decision-making regarding his own care and treatment, even as he gained the maturity and independence required to make informed, thoughtful and age-appropriate decisions.

“As time progressed I was able to grow up,” Luther said.  “I am still trying to please my parents but my goal is to move to self-direction.  I work on it every day.”

Bonnie managed the complex family dynamic with empathy and skill, respecting the parents’ beliefs while advocating for Luther’s empowerment and autonomy.

“Luther’s parents knew I was looking out for the best interests of their son,” she said. “I never judged or villainized them, and tried very hard to understand their cultural mores and point of view.”

In 2012, Luther’s first residential rehabilitation placement ended after only a few days, when his parents insisted that he move back into the family home. Luther went along with the decision but it left him feeling angry and upset. A year later, after a series of unannounced, disruptive visits, Luther moved out of a second residential rehabilitation facility under tumultuous circumstances.

With Bonnie’s backing and encouragement. Luther worked to gain confidence in his ability to make autonomous decisions. Luther had previously appointed his father as legal guardian, giving him control over Luther’s services and medical affairs. The document had been signed at a time of high conflict. It wasn’t what Luther wanted, but he felt unable to say no.

In the winter of 2015 Luther assumed his own guardianship, managing the long process by himself.

“Being independent will help me become the person I was meant to be and to have a meaningful life,” he said. “When I signed my name I felt so proud.”

When the guardianship issue was resolved, an opportunity became available for placement in an Individualized Residential Alternative (IRA), a community-based residence that designed to encourage and support those with special needs to live as independently as possible. Luther wrote letters on his own behalf that explained why he was a good candidate for the IRA. Easter Seals New York staff recommended Luther for the program, attesting to his capabilities in terms of maintaining an apartment, completing paperwork and managing money; his respectful, kind and considerate demeanor; his ability to hear and assimilate constructive criticism, and his growth with each new opportunity for independence.

In August 2015 Luther’s application was approved. “I felt very proud of myself for hanging in there,” he said. “I was able to become independent and grow as a person, more than that I am able to fend for myself.”

Luther is taking advantages of the support and program activities offered by the IRA, which include training in a wide range of life skills – cooking, cleaning, recreation, money management and social skills – and school, work or programs outside of the home. He has taken driving lessons, and is excited about his upcoming road test. Luther completed courses at Monroe Community College, earning a high “B” average, and enrolled in a volunteer day program. He arranged for his own residential services, and when his Medicaid Service Coordinator moved to another state, prepared a list of questions by himself and interviewed proposed replacements to determine the best match.

The shy and withdrawn youth Bonnie remembers has become a prolific communicator. Luther embraced social media as a means to express himself, and has created an online presence that has attracted loyal followers, including Former New York Lieutenant Governor Bob Duffy; Nikki Rudd, news anchor for 10NBC, and Rochester Mayor Lovely Warren. Luther recently applied to broadcasting schools in Cleveland and Chicago. He dreams of having his own radio or TV show, or a career as an editor in social media.

In February Luther went to Albany to speak to lawmakers about self-advocacy for people with disabilities. Luther has a message - “I am a big advocate for all rights, for disability and civil rights and same sex rights I believe that all love is beautiful, that we are all are created equal, and that we all have something special to offer.”

Luther finally got his birthday party. On November 7th, 2015, he reserved a room at Bill Gray’s Restaurant in Henrietta, and welcomed old and new friends, his aunt, uncle and grandfather, and social media fans who are inspired by the journey of Luther Saint-Joy.