Home > _Easterseals Nebraska > Who We Are > Stories Of Hope > Spotlights

Keathen Cogswell and his twin sister Kennedy Cogswell were born in 1997, six and a half weeks early. Despite being born early and weighing around five pounds each, they both were healthy and doing well for about a week. At that time the twins got sick, and Keathen became septic. (Sepsis is a serious medical condition that is caused by inflammation as a result of an infection.) He had a grade 4 bleed in his ventricles, which resulted in cerebral palsy. “We’re lucky, said Keathen’s mother Joanna Vander Linden, “they didn’t think he would ever do much of anything.” 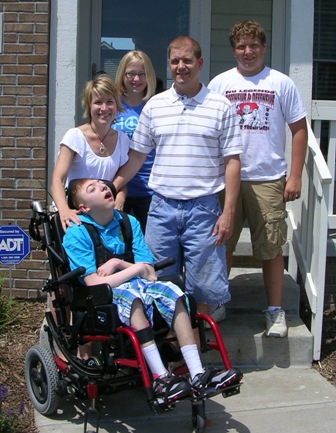 Over the years the Vander Linden family was able to provide their son with swimming, speech and occupational therapy, etc. In addition, the family was fortunate to be able to afford a variety of assistive technologies for their son. They acquired wheelchairs, specialized car seats, positioning aids, switches, communication devices, and even several home modifications. However, as the family looked into the future, Joanna knew there would be some big ticket items that her family may need help to secure.

Joanna went to Easter Seals Nebraska’s Alternative Financing Program (AFP) in 2010, because Keathen was growing older and taller, and it became increasingly difficult for Joanna and her husband to lift Keathen in and out of his special car seat.

“ We had got to the point that if someone could stay home with Keathen, then part of the family would go somewhere. Anytime we had to take him, it was four lifts. Plus, you had to lift the wheelchair into the car and out of the car. It was a lot of lifting to take him anywhere.”

AFP is an outreach program that provides low interest rate loans to individuals with disabilities to purchase assistive technology devices such as wheelchair ramps, modified vehicles, braille equipment, hearing aids and many more items. AFP fills a funding gap for individuals with disabilities that have a need for assistive technology and do not qualify for assistance through other programs.

Since AFP’s inception in 2004, it has processed over 132 loans to individuals with disabilities or their family members, totaling over two million dollars.

“I would say a majority of our loans are for vehicle modifications, and the modifications on a vehicle can be astronomical, anywhere from $15,000 all the way up to $60,000 just for the modifications alone, and that does not include the price of the vehicle,” AFP Assistant Laurie Halpenny said.

“The Vander Lindens were excellent candidates for our loan program. They needed a van for their son Keathen who has cerebral palsy, and they were able to receive a low interest rate (3.25%) on a van.”

The modified van benefits the Vander Linden family in several ways: (1) Keathen is now able to attend his sibling’s activities and participate in his own activities like baseball and soccer, (2) Joanna has less back pain than she did before, and (3) in Joanna’s words, “The van has definitely allowed us to much more easily go places and make sure that Keathen is involved. It’s given us the ability to be a family together.”

This story was published in the Assistive Technology Partnership Newsletter, Issue 2, 2010.