The beginning of my life as a caregiver started in 2009. This was when I and other family members noticed my wife, Mary, having mild memory problems. At first it didn’t seem too serious. As time went on, her short-term memory kept getting worse. At first, I was able to cope with the situation.

About a year or so later, Mary’s memory became much worse. As a family, we decided to take Mary to the Rush Memory Center. With a lot of testing, it was determined that she had Alzheimer’s.

I tried to take care of Mary for 3 ½ years. It became too difficult to deal with. I hate to admit it but I lost my patience.

In December 2013 I had placed Mary in a memory care facility. This was a very hard decision for me to make. I just wasn’t able to take care of her 24/7. After a while I became comfortable with her care at the facility. Mary was in the facility for 2 ½ years. She passed away August 7, 2016.

I’m grateful that I found a caregiver support group that helped me through those hard times. 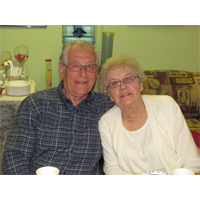