In 2008 my mother-in-law, (Ginny) was diagnosed with dementia.  A few months later it was evident that she could no longer live alone.   My husband and I left our small town, over a 100 miles away, and moved in with her to help.  We knew nothing about caregiving but we became caregivers.  There are so many experiences to tell and sometimes it’s hard to describe our journey.  We had sad times, bad times and we had good times.  Sad times were when she didn’t know who we were.  Bad times were when she would become combative and refused to cooperate.  The good times were when we were able to laugh and enjoy each other’s company.   Those were the times we clung to and cherished because as time went on, they became few and far between.  Through our journey we attended a caregiver support group.  Leeza’s Place became a lot of things to us.  It became a learning center by listening to other caregivers and hearing about their journeys.  We became teachers by sharing what we were experiencing from our journey.  But most importantly, we became a family with the other caregivers not only because of the feeling that we were not alone, but because of the closeness we felt towards each other and we could tell what was on our hearts and not be judged.

After about six months of becoming caregivers for Ginny, I became a caregiver to my sister.  She had passed out while driving due to a heart attack and needed help after open-heart surgery and recovery from her injuries of that car accident.  What I learned in those few short months helping with Ginny prepared me for being a caregiver to my sister for the next three months.  I didn’t feel new to caregiving and was more confident in doing it.

Everybody’s journey is different, but they are all unique.  In the words of Edward J. Merzlock in his book, As Mom Fades Away (Trafford Publishing, www.trafford.com), “when it’s over, it’s not over”.   As we look back, we think of the things we could have done differently but we remember the good times more.

We are still attending caregiver support group meetings at Easterseals Joliet Region and facilitate two others.  We want to give back what we were given. 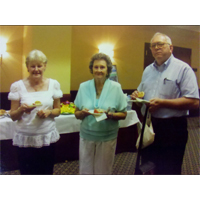