My caregiver journey started on February 7, 2007. Never in my wildest dreams did I think it would last 10 years and test every emotion a human could possess.

On that February afternoon Tom, my husband, was shoveling snow and suddenly his right leg went completely numb. He managed to return to the house, and off to St. Joseph’s Hospital we went. He had a major blockage to his femoral artery. The doctors were able to return the blood flow with a stent. I thought that was the end of the problem, but it was only the beginning.

Nearly a year later he had more blockages to his legs that required five more stents, which was a temporary solution and the worse was yet to come. In March of 2008, colon cancer was detected, which was the second time for him. He had surgery to remove the cancer. Following that he had a stroke, a tumor on his jaw, two femoral bypasses, brain surgery to repair an aneurysm, a lung infection, two different bladder cancers, chemo, a rib fracture from a fall, kidney failure, dialysis, and a leg amputation. His good left leg started to go bad and the doctor’s wanted to take his good leg when he finally said that he had had enough.

During all of these episodes, I finally decided to get help for myself. I was exhausted and completely worn down mentally trying to take care of him, our home, and myself. Through a Senior Fair I found out about a caregiver support group and joined.

I finally found a place I could come and be among others who were struggling also. I wasn’t alone. With the help of the support group, counseling and medication, I was able to hang on and carry on. I found friends that became family. I managed to carry on knowing that I had people who cared and understood. Without my caregiver family I don’t know how I would have been able to keep going. I’m forever grateful for everyone in our group.

My journey ended on Valentine’s Day in 2017, but a new chapter has begun. I’m slowly finding a new normal. I still come to our meetings at Easterseals because I still need the support and I can offer my new experience to those who are still on their journey. It also keeps me out of trouble!

I also want to thank Easterseals Joliet Region and especially Kathy, our coordinator, and my extended family for their support. Without them I may not have made it. 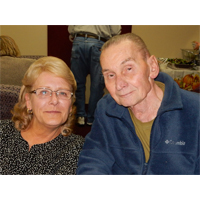