Home > _Easterseals New York > Who We Are > News

Celebrating the 30th Anniversary of the Americans with Disabilities Act (ADA) 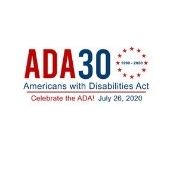 This week marks the 30th anniversary of the Americans with Disabilities Act (ADA), which President George H.W. Bush, who signed the ADA into law, described as “a declaration of equality.” The legislation was widely hailed as expanding the rights and independence of Americans with disabilities, and as “the most sweeping anti-discrimination measure since the Civil Rights Act of 1964.”

The ADA banned discrimination against people with disabilities in employment, transportation, public accommodations, communications and access to state and local government' programs and services to ensure that people with disabilities have the same rights and opportunities as everyone else. Today we take ramps, closed captioning and workplace accommodations for granted, but prior to the ADA these were not available for the tens of millions of Americans living with a disability.

The Fedcap Group is honored to recognize the 30th anniversary of the ADA, which brought fairness, opportunity and fulfillment to the lives of millions. We understand the life-changing implications of having the opportunity to reach one’s own potential. Thanks to the ADA and the brave individuals with disabilities who fought for its passage, we no longer think of people with disabilities as different from anyone else. There is still a long way to go to ensure full rights and participation, but we stand with the nation in celebrating this milestone legislation as well as the immeasurable contributions of people with disabilities to the safety, prosperity and wellbeing of our country.