Home > _Easterseals Serving Central Texas > Who We Are > News

Easterseals Central Texas, the leading organization serving people with disabilities in Central Texas, is launching the inaugural Disability Awareness Day on November 4, 2017. Disabilities affect one in six Central Texans, impacting thousands of families in our community. With the launch of Austin’s first Disability Awareness Day, Easterseals aims to raise awareness around the challenges Austin’s disability community faces as well as raise needed funds to provide programming and support to people with disabilities.

As the eleventh most populous city in the nation, the city ranks only forty-first in disability-friendliness, underscoring the need for further awareness and understanding. 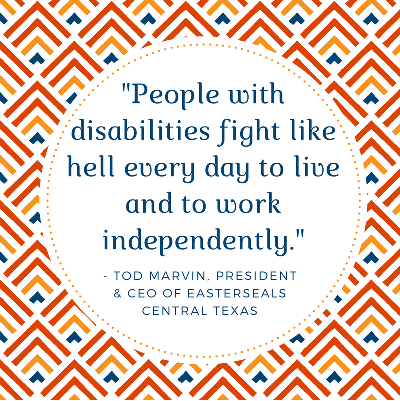 Disability Awareness Day will kick off with a proclamation by City of Austin Mayor Steve Adler. Throughout the day, the Texas Wranglers will be dispersed on various street corners all over the city raising money for Easterseals through their annual Citywide Hold Up. More than 1,000 volunteers participate in the Hold Up. Alongside the Wranglers, the Firefighters’ Association will also be raising money with their pass-the-boot campaign.

Additionally, local businesses are participating in Disability Awareness Day by contributing a portion of their sales to Easterseals, including Zocalo Cafe, Güero's, Kendra Scott, Alamo Drafthouse, ColdTowne Theater and Kebabalicious.

The daylong event will culminate with Easterseals’ fifth annual Dia De Los Muertos Festival at Stubb’s BBQ. In addition to live music and performances, the festival is a unique Día los Muertos cultural experience with art, kid’s zone, food and drink. Children 6 years and under get in free with a valid purchased adult ticket. Tickets go on sale soon at www.austindiadelosmuertos.com for $30.

“Whether people are shopping, eating or listening to music, we want all of Austin to stand with our neighbors, colleagues, friends and family members with disabilities,” said Tod Marvin, President and CEO of Easterseals Central Texas. “people with disabilities fight like hell every day to live and to work independently. This is Austin's opportunity to stand up and show our support for these incredible people. And in the process, it will make whatever obstacles we have to overcome in our lives, seem very small."

As the seventh largest charity in the nation, Easterseals has been a part of the Central Texas community for 80 years and is the largest independent nonprofit provider of disability services in the region. It has 20 different programs that serve nearly 16,000 people with disabilities and their family members each year.