A Field of Dreams: A Baseball League for Kids with Disabilities 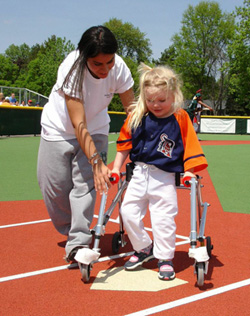 Steve Peck was enjoying another day at the Miracle League ballpark in Southfield, Michigan when Elissa Marshall, a 14-year-old player, surprised him and said “Mr. Steve, today I want to hit the ball myself.”  Elissa, like all the kids in the Miracle League, plays baseball with a disability. She is blind, so she usually has an able-bodied partner to help her hit the ball before she heads around the bases with a rope as a guide. Today, she was ready to experience the crack of the bat for herself.

Steve, who is the Founder and Director of the Miracle League at Easter Seals Michigan, said “Ok,” but he thought, “How?” He took her aside and showed her how to swing, counting “1, 2, 3, swing!” Then he let her take her stance at the plate, on her own, with the crowd on the edge of their seats. She listened for the whoosh of the ball. Swing, and a miss. Swing, and a miss. Then, after about 10 swings, crack! The crowd cheered, and Elissa’s mom got teary-eyed.

“You don’t know what you’ve done for her self-esteem,” Elissa’s mom, Denise Marshall, said to Steve.

For Steve, it was just another day of baseball at the “Field of Dreams.” The ballpark was built in 2004 especially for people with disabilities, thanks to funds raised by the community. That means the field is made of a cushioned synthetic surface, and the infield is rubberized, so wheelchairs, crutches and other mobility aids don’t get mired in mud. It levels the playing field so kids of all abilities can hit, run, catch and score.

Assistive equipment includes oversized plastic bats and a softer baseball, and every player is allowed to swing until he hits the ball and scores a run. Pitches are served underhand from a closer range. With just the price of registration, every child gets a baseball hat, jersey and an end-of-season trophy.

Miracle League team members are assigned “buddies” who assist them in hitting the ball and “running” the bases. Buddies can be siblings, schoolmates, parents, or anyone who wishes to volunteer their time to give a child the gift of baseball. Volunteers are typically 12 or older, with one exception. 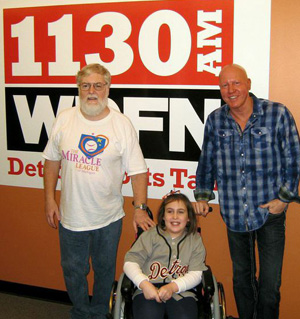 Punky helping to spread the word about Miracle League.

Emily “Punky” Lickman’s favorite baseball buddy is her younger sister, Sophia. Her mom, Michelle Lickman, says that the Miracle League is a family affair. Sophia is Punky’s buddy on the field, and Punky, age 9, practices with her dad. Off the field, they watch the Detroit Tigers together, all cheering while thinking of their own next big plays.

Punky, who gave herself the nickname after identifying with the spunk of the TV character Punky Brewster from the ‘80s, has spastic quadriplegia cerebral palsy.

“The Miracle League allows Em to honor her disability,” says Michelle. It gives her a chance to just be a child with a disability for a while. She is mainstreamed, and she really works hard to function in the ‘typical world.’” Michelle also says it lets her relate to her peers more. “She can say she’s a part of a team too.”

The league doesn’t just mean a lot to the players, but for some parents it’s the Little League experience they thought they’d never have. Steve says he’ll never forget when he asked a dad to coach. The father was speechless, and his wife, who stood beside him, cried and whispered, “See honey, you can coach. You can coach.”

While most kids play in the non-competitive league, the Miracle League now has a youth competitive league too. The players use metal bats, and coaches pitch from the mound at a standard distance from the plate. The players don’t have buddies—they hit and run to the bases all on their own. It’s 8 strikes and you’re out. They play to three outs or six runs each inning. 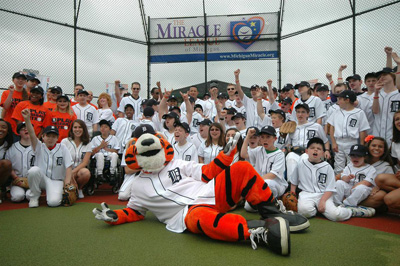 The heart of the program began with the non-competitive league, which is still thriving every year from the June through October season, thanks to sponsors, concessions sales and donations. As the Miracle League website puts it, “Dylan can’t walk but that doesn’t stop him from rounding second base. Jennifer has Down’s syndrome, but the Miracle League has given her more self-esteem than her parents ever dreamed possible. Kaliegh can’t hear, but the cheers of his teammates have never been louder. The Miracle League gives hundreds of individuals something few dreamed possible, the chance to play baseball.” Batter up!

Learn more about the Miracle League and how you might start one in your area.

Catch up on the latest at the Easter Seals Michigan Miracle League and its unique, accessible ballpark.

Explore all the camping and recreation programs offered by Easterseals, the largest provider of recreation to people with disabilities.

Donate to Easterseals to help support recreation programs for people with disabilities.