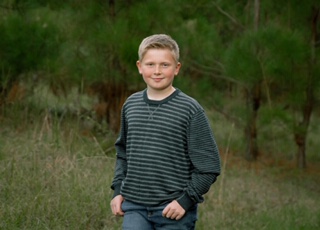 I am writing you today to tell you about what a blessing the Champions for Children program has been for my family.  My son, Gunnar, has been in speech therapy since the age of 2 years old.  He got his official diagnosis of Apraxia at age 3 years old.   Most people are not familiar with Childhood Apraxia of Speech/Dyspraxia.  It is a motor planning disorder that effects the way the brain sends signals to the mouth and tongue muscles, so repetitive therapy is crucial. This greatly affects speech. His coordination was also affected.  Recently, we noticed him having sensory problems, and cognitive processing issues.  We had some psychological testing done.  Even though cognitive processing, sensory, and a few issues showed up in the testing, there were not enough markers to give another diagnosis regarding those specific issues.  But that doesn’t make light of the fact that he still struggles in those areas now as well.  The therapist recommended retesting in a couple of years when a little more maturity is reached.  She said with some of the issues he is dealing with, we could be dealing with possible Asperger’s in the future.

Our journey began as soon as Gunnar began baby babbling.  Gunnar was a very lovable, happy, and very outgoing from the very beginning. As a Mom, you just know when something is not quite right.  When other babies his age began babbling, Gunnar’s was a little different. When babies his age began trying to speak their first words, Gunnar just made repetitive sounds. When his friends began forming sentences, Gunnar was still making repetitive sounds. I knew this wasn’t normal, but in the back of my mind I was praying he was just a late talker. We began seeing a therapist at age 2. She suspected Apraxia.  I had never even heard of this before and just hearing the word scared me to death.  There were many tears and lots of prayers to follow.   Gunnar received therapy twice a week for the next several years. It was recommended that he get therapy at least three times a week, more if possible. We were paying out of pocket because our health insurance did not cover therapy at the time. So, twice a week was all we could afford and even that caused lots of financial strain on our family.   My husband changed jobs and so did our insurance.  We were so excited to find that therapy was covered with this new company.  However, we soon found out that all of the local therapists were out of network. So, basically, we were still paying out of pocket.  I made call after call, and wrote letter after letter to our insurance company trying to get our therapy changed to in network if possible. I also, had all transcripts of Gunnar’s years of therapy sent to them as well as evidence that it was greatly needed.   I was getting nowhere with the insurance company.  It was heartbreaking for me to see our child struggling and had an official diagnosis and could not get his very much needed therapy covered.

Someone mentioned the Champions for Children program to me one day. Feeling so defeated after being told no for so many years, I honestly didn't think much more about it.   Then a few weeks later, someone else mentioned it to me.  This time, I did check into it.  After speaking with Mrs. Angela Sanders, I immediately felt hopeful again.  She was so sweet, understanding, and extremely helpful.   This program has been such a God sent blessing to our family.  Gunnar is now 9 years old and is in fourth grade.  He is in a regular education classroom, and making very good grades.  He has surpassed goals I never thought he would meet, and I am so thankful for each and every one.  I know he will still be in therapy for years to come, but the progress he has made thus far is remarkable.  I just want to say thank you to the Champions for Children program and all of those that make this program possible. My family is beyond grateful for the assistance that has made Gunnar’s much needed therapies possible.