Home > _Easterseals Central Illinois > Who We Are > Stories Of Hope > Spotlights 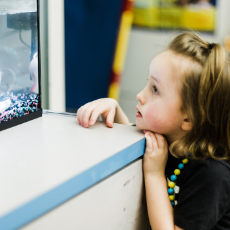 One word to describe him: Sweet

Odie loves cars and has quite the growing collection of Hot Wheels. He also likes anything miniature, like Shopkins and other figurines. Odie likes to play outside, either in the backyard or at the playground or park. He loves swimming and to run. He enjoys car rides, and going through the car wash.

His parents dream for Odie is for him to live the fullest, most independent life that he can. To their family, inclusion means that Odie isn’t left out of anything and gets to experience as many things as possible. They share that they are always working on things like going to restaurants, stores, parks, and zoos or aquariums, so that he gets to enjoy the same experiences as other children.

Odie’s parents feel that he has been empowered a lot through his therapy, by being more in control of himself and his emotions and frustrations. A lot of that is because of his increased ability to communicate verbally, with signs, and with his iPad communication app.

They share that “before we started therapy he wasn’t able to express his wants and needs very much at all. While he still has a limited vocal vocabulary, he is able to use some words in combination with signs and his iPad communication app to tell us if he wants or needs something. Now he can pull up different kinds of foods with his iPad to tell us when he is hungry and what he wants to eat. He also tells us when he wants to go for a car ride or go visit one of his grandparents. Recently we were able to take family pictures for the first time since Odie was a baby. This was something we were worried we may never be able to do because of maintaining Odie’s attention and trying to keep him focused on doing something that he doesn’t exactly want to do or see the point in doing.”