Stepping in from the Outside: Caregiving for a Neighbor 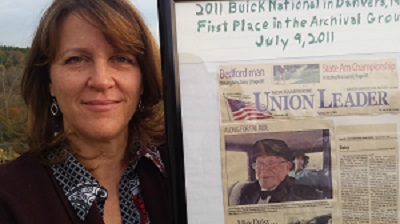 Remember the movie Driving Miss Daisy? For those who may not, it tells the story of two strangers, a chauffeur and a matron, becoming good friends by helping each other within their respective societal roles.

Ginger Munson recalled seeing her neighbor of 5 years, Dave Brooks, drive into antique shows in his old black Ford sedan dressed up as the chauffeur from the movie. A mannequin in the backseat played the role of Miss Daisy. His display was a hit every year and it was just one example of why Brooks’ fun and creative personality was considered a trademark.  By nature, he thought outside of the box and always had a positive outlook. Ginger got to know this well over the course of their time as neighbors.

He was also an outdoorsman with a predictable schedule for walking and mowing his lawn every day.  A few months ago, Ginger noticed Brooks became significantly less consistent in his regular activities.

“He just wasn’t feeling like himself,” Ginger explained, “…and he was a little confused sometimes. That weekend, I went over to see what was going on and how we could be of assistance. That was kind of the beginning of our closer relationship and stepping into his daily life.”

Brooks was showing significant signs of Alzheimer’s and dementia. Concerned for his well-being and safety, Ginger began managing his care. “My first concern was trying to find out who did he know? Who takes care of his things? Who are his relatives? He kind of refers to them socially in conversation but how do you find out really who that person is?”

A Friend instead of Family

Brooks lived alone as a bachelor. Though he was very happy and independent, he had no family in town so Ginger made sure Brooks was well taken care of.  Still, it was sometimes challenging to assume the role of caregiver when she was not a part of Brooks’ family.

“I had to be very clear that I was a neighbor, and say ‘he doesn’t have any family, I’m the person that’s helping him and he agrees with me helping him,’” she explained. “It’s just wanting to be sensitive of the person because this isn’t your family…[and]not wanting to overstep your boundaries or do anything seemingly inappropriate.  I mean, I fully believe I have his best interest in mind but someone else will see that differently. Who am I to know really what is best for him? You just try to do what you think is good and appropriate and helpful.”

Ginger quickly discovered fulfilling those tasks involved significant work if she wanted to adhere to her standards of care. “I’d go over there and get wrapped up into 2 hours easily because it took a while to get anything accomplished. So over the course of time, I sensed more of what was going on with him in terms of his dementia. I would then redirect the conversation to be more productive when I’d recognize that we’d get distracted. So it took a lot of time, and it actually ended up being a little bit stressful.”

Ginger’s husband had a significant role in reminding her to set boundaries. “[He] helped me to just step back a little bit, to take care of my own family… I have four children, I do work part time, my husband’s in the military and he’s coming up on a time of deployment – so I was kind of looking at all those pieces and realizing I couldn’t continue at that level. But I certainly wanted to in my heart.”

It became increasingly difficult to manage her time and effort as Brooks’ condition became more complex.  She discovered how easy it was to exhaust her energy. Stepping away after giving so much would not come easy for her or the person in need.

“You have to take care of yourself,” she advised. “Even if you can only see them once a week, acknowledge the good you’re doing as opposed to ‘oh my gosh, I need to be over there more.’ Anything you do, it’s in a positive direction. And ask for help, don’t be afraid to ask for help.”

Ginger eventually called Easterseals to help her with Brook’s case. The Seniors Count and Care Companion programs in New Hampshire stepped in to make arrangements for 24-hour care and kept track of Brooks’ general medical needs.

“They were just so inherently caring. Even after an incident where he went to the hospital, at least 3 of the individuals emailed, called me or came to me and said ‘Hey, how’s it going with him?’ Even when it wasn’t on their workload anymore they had their heart to follow back up with me.”

Caregiving for Our Neighborhood

Brooks is now in an assisted living home, but interwoven in the joys and challenges of caring for her neighbor, Ginger touched on the weight of our actions in the lives of people around us. She began to notice more clearly how seniors can be dismissed in everyday life and society.

“Our population isn’t treating our parents as well as we used to, not with the kind of respect or reverence that maybe we should. And my heart goes out to them because they’re people… they have things that maybe excite them or upset them and they have love for their family members. Just because they’re older and see things differently doesn’t mean they’re any less important.”

Like the chauffeur and matron in Driving Miss Daisy, we may discover that our attempts to help and care for people will become more than just an obligation or duty, especially as relationships grow and evolve.  Caregiving isn’t just reserved for our intermediate families, it concerns everyone. As the saying goes, sometimes it takes a village. Easterseals is a part of your village, your community, to help.