A Family Vacation: Respite for My Dad and Me 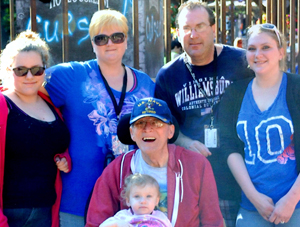 Beth Anne Eagle made a promise to her mother that would eventually change her life.

The 44-year-old promised to always care for her father, Neil Cadmus, before her mother, Betty Ann, died in 2005.  And since then, that promise has turned into so much more for both Beth Anne and her dad.

Neil suffered a stroke about 3 years ago which ultimately left the 74-year-old paralyzed on the left side of his body and unable to care for himself. So when it was time for Beth Anne to become Neil’s primary caregiver, she wouldn’t have had it any other way.

“We were close before the stroke, but my dad was always one of those people who were never very affectionate,” she says. “Now we’re the best of friends.”

A stronger bond with her father isn’t the only thing that Beth Anne is grateful for. She and Neil also have access to resources and support through Easterseals Delaware’s Personal Attendant Services, a program that specializes in providing personal, individualized support for adults with physical disabilities.

Beth Anne says her father’s illness has also made her more aware of how important it is to take care of herself and not just her father. She realized they both need some relaxation and fun, not to mention a change from their day-to-day routine. “He’s been desperate to do something,” she says. “I knew he wanted to get out of the house, and I was desperate to take him somewhere.” And a trip would only continue to strengthen their bond. 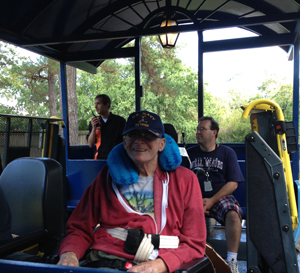 So Beth Anne, who is also a wife, mother and grandmother, decided to take her entire family, including Neil, on a weekend road trip to Busch Gardens in Williamsburg, Virginia. Sure, it sounds simple enough, but Beth Anne says the theme park is four hours away from their home in Delaware, and she knew accessible travel and lodging for her dad would be the key to a successful trip.

“I was very nervous, because we had only been to [visit a relative once before] and it wasn’t a very good trip,” she says. “It was hard for him to get up and down the stairs so Dad was upstairs for the most part.”

Although Beth Anne was a bit nervous about the trip, she was determined to make this trip happen, especially for her father’s sake.

So, Beth Anne and her family loaded up their van and arrived at the hotel with a very happy Neil a few hours later.

“He was so excited because he got to take a shower for the first time in a really long time,” Beth Anne said about her father who was able to book a handicap accessible room for people with disabilities.

The remainder of the trip was full of non-stop fun for the entire family, including Neil. Beth Anne says Neil particularly enjoyed the trolley ride around the park.

As for other caregivers who are thinking of planning a trip for loved ones with disabilities, Beth Anne says there are some things to consider.

To start, you should call ahead of time to insure that the hotels and tourist attractions are able to accommodate your needs. It is particularly important to insure that everything is accessible for your loved ones.

“For some people, the word “accessibility” just means they have an [accessible entrance],” Beth Anne says. “I also recommend—when you can—going to visit the place ahead of time and learning a route that works for you guys.”

Get more information on caregiving and respite services today