For Better or For Worse: 50 Years of Marriage

What are the keys to having a long marriage? Well, according to some, the keys are trust, communication and lots and lots of love. Just ask the O’Sullivans and the Demers. Both couples have been married for about 50 years, and boy, do they have stories to share. 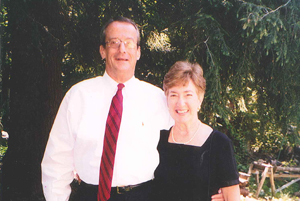 “If you don’t love someone, it would be really hard to be there for them through the good and bad times,” Janet says. The 73-year-old and her husband, Joe, also 73, have been married for 50 years, and they have experienced so many challenges and triumphs together.

But the New Hampshire couple’s most recent experience has been the most challenging yet. Joe was diagnosed with Alzheimer’s disease seven years ago, and Janet became his primary caregiver.

“I never said, ‘Oh I’m not going to do this,’ because I felt a responsibility to him, because he always took care of me,” she says.

“Easterseals has really saved us,” she says. “The truth is you can’t do it all by yourself. You need help.”

And even though her husband is sometimes unable to communicate his own thoughts and feelings, Janet still makes it a point of showing Joe lots of affection and plans date nights with friends.  “I’m not embarrassed in front of other people to put my arm around him and give him a kiss. I know he can’t express it, but I know he loves it,” Janet says.

“He was a big, tough marine, a football player and a wise guy who was always cracking jokes all the time. It’s sad to see what he’s reduced to now, but he’s still inside and I know he’s still Joe.”

As teenagers, Joe and his identical twin brother, Jim, were both popular athletes in the southern New Hampshire area. “I kind of knew who they were, but we didn’t go to the same high school,” Janet says.

The couple started dating right before their freshman year of college in 1959 and Joe proposed about six years later. Shortly after graduating from college, Joe and his twin brother both enrolled in the United States Marine Corps.

As a result, Janet stayed in New Hampshire while Joe was stationed in Virginia for a couple of years. Fortunately, the long-distance didn’t last long, because Joe eventually retired from the service and got a job working for a pharmaceutical company while Janet continued her career as a teacher. And as if they weren’t already busy, the couple also started a family.

Now, three kids and three grandkids later, the last few decades hasn’t changed the way Janet feels about her husband.  “We always had a pretty good team, where [Joe] would help take care of the kids and I would help with the finances,” Janet says. “But now, I totally have to manage the finances, the house and everything including his care.”

Janet and Joe are living their vows, and loving each other after all these years. 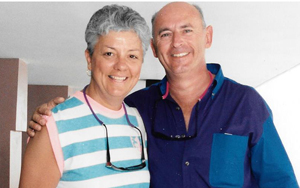 Andre and Diane Demers, both 68, have been married for almost 50 years, and they will be the first to tell you that marriage is not always easy, but it’s worth the journey.

“It always seems like a 90 and 10 share of the responsibilities in a relationship where someone is giving 90 [percent] and the other’s giving 10 [percent],” Andre says.  “Maybe down the road, it becomes 50/50, but it’s all really about give and take.

The New Hampshire resident and his wife met right after high school and dated for almost two years before deciding to get married in 1967. Shortly after getting married, Andre would go on to spend a year in Vietnam as a helicopter pilot.

After retiring from the service, the couple would both go on to have successful careers in banking. At a glance, the couple seemed to have it all. They had good jobs, a solid marriage, and memories of amazing trips around the world, but there was one thing they were never able to do.

“We never had children, which was not by design, but it just never happened,” Andre says. “We talked a little bit about adoption, but she wanted her own children.”

They never let this break them. In fact, Diane and Andre built very  close relationships with their nieces and nephews, and they credit the success of their mararage to their ability to manage whatever life threw their way, together.

Soon after their cruise, the couple learned that Diane had Alzheimer’s disease. Of course, Andre has tough days as Diane’s primary caregiver, but working with Easterseals Adult Day Services has been a huge help. “I’ve just been overwhelmed by their generosity,” Andre says.

Andre has advice for other couples who are starting to notice the early signs of dementia or Alzheimer’s. “Don’t categorize some actions as just a ‘senior moment.’ Get it checked out,” he says.

Andre also attributes their long marriage to the couple’s strong, Catholic faith, as well as  their loyalty and love for one another. “We said our vows, ‘for better or for worse,’ and if there’s something we can do [if there was something wrong], we did whatever we could to work it out,” he says.

Want to hear more on how Joe proposed to Janet? We have their proposal story right here.