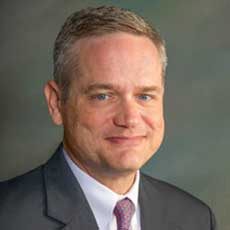 The Board of Directors of Easterseals Southern Georgia, Inc. is proud to announce the selection of John McCain as its Chief Executive Officer.  In this role, McCain will lead the local organization into the future as a continued leading provider of disability services in Southern Georgia and the Big Bend of Florida.

McCain is an experienced and committed leader from the nonprofit sector.  He most recently served as the CEO of Horizon Goodwill Industries operating in Maryland, Pennsylvania, Virginia and West Virginia.  Prior to his leadership role with Horizon Goodwill Industries, he served as the Chief Operating Officer of Goodwill Easterseals of the Gulf Coast in Mobile, AL for thirteen years. John also has experience as a staff accountant for a CPA firm and as a controller for a distribution company.

John is a native of Pensacola, FL and has lived most of his life along the Gulf Coast.  He received his B.S. in Accounting from the University of South Alabama and his M.B.A. from Spring Hill College.  He is also a 2010 graduate of the Goodwill Industries International Executive Development program.  John has served on the board of the Alabama Society of Public Accountancy, the Greater Hagerstown Committee, Virginia Goodwill Network, the Lion’s Club and Rotary.

John and his wife Lynn have two daughters and two granddaughters.  In his spare time, John enjoys exploring historical sites, parading in a Mardi Gras organization, and surrendering golf balls to the woods surrounding a course.