Home > _Easterseals South Carolina > Who We Are

Providing exceptional services to ensure children with disabilities or special needs have equal opportunities to live, learn, work and play in their communities since 1934. 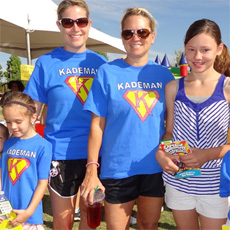 Easter Seals Walk With Me is an event to raise awareness and support for families living with disabilities! Join hundreds of passionate people in your community for a day full of entertainment, fun and, of course, our signature walk! Every walk event is different -- your walk could be at a local school or at the aquarium. But every walk is a lifeline of funds that enables your local Easter Seals to continue providing vital services and support to people with disabilities and their families.

Tragedy Leads to Inspiration
In 1907, Ohio-businessman Edgar Allen lost his son in a streetcar accident. The lack of adequate medical services available to save his son prompted Allen to sell his business and begin a fund-raising campaign to build a hospital in his hometown of Elyria, Ohio. Through this new hospital, Allen was surprised to learn that children with disabilities were often hidden from public view. Inspired by this discovery, in 1919 Allen founded what became known as the National Society for Crippled Children, the first organization of its kind.

The Birth of the Seal
In the spring of 1934, the organization launched its first Easter "seals" campaign to raise money for its services. To show their support, donors placed the seals on envelopes and letters. Cleveland Plain Dealer cartoonist J.H. Donahey designed the first seal. Donahey based the design on a concept of simplicity because those served by the charity asked "simply for the right to live a normal life."

The lily--a symbol of spring--was officially incorporated as Easterseals' logo in 1952 for its association with resurrection and new life and has appeared on each seal since.

Easterseals Today
Easterseals assists more than one million children and adults with disabilities and their families annually through a nationwide network of more than 450 service sites. Each center provides top-quality, family-focused and innovative services tailored to meet the specific needs of the particular community it serves.

Easterseals South Carolina is proud to provide the following services:

At the core of the Easterseals organization is a common passion for caring, shared by its 13,000 staff members and thousands of volunteers, and by those who support its mission. This heart-felt commitment to helping people with disabilities and their families is what Easterseals is all about.