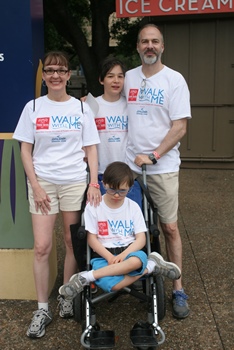 Cristen Reat is a stellar communicator. She has interpreted military secrets from one language to another, is proficient in several languages and holds a master’s degree in Russian literature. One of her career highlights, however, is as a mom: when she found a way to make communication and learning easier for her sons Vincent and Martin and many other children with special needs.

Vincent, age 10, lives with Down syndrome and a visual impairment, and Martin, age 13, has Asperger’s syndrome. Cristen’s game-changing idea occurred to her in 2010 during two groundbreaking events: the invention of the first iPad, and the mainstreaming of her son Vincent into a local kindergarten. Major!

For many moms, sending a child off to kindergarten can make us cry or wring our hands, hoping they make friends at the snack table and take to circle time. Cristen had other concerns, seeing that at age 6 Vincent’s fine motor skills “were like a typical 18-month-old’s,” she explains. “For Vincent, holding a pen or pencil was impossible. The iPad was the answer for him.” 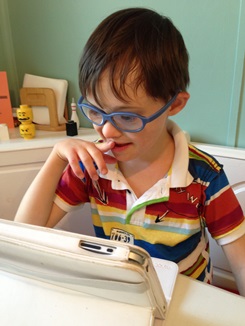 Vincent had tried joysticks and other technology to write and communicate prior to the tablet, but the iPad was the most mobile, agile device for him.

For Cristen, it was the start of a now award-winning idea-turned-program for Easterseals. The program is BridgingApps, based at Easterseals Greater Houston, and the award is the Verizon Powerful Answers Award for Education that came with a $700,000 prize in early 2014.

In the Beginning, In the Red

Before it was an award-winning Easterseals program heralded for pairing people with disabilities with applications and technology that meet individual needs, it was a parent support group. Parents and advocates for children with disabilities met in living rooms, munched on chips and salsa, and swapped ideas about technology to help their kids learn, communicate and integrate more easily. They tested apps and explored ways to use the iPad, particularly in school.

“We started on a shoestring,” says Cristen. “It was all out of pocket, and we were in the red. For six months, my co-founder, Sami Rahman, and I ran and grew the program on the side, on top of our day jobs.”

BridgingApps became a part of Easterseals in May 2011 and took off, with three assistive technology testing labs in the Houston area and satellite locations now in Austin, Rio Grande Valley and Fort Worth, Texas. Not to mention a more robust website with resources for parents, teachers, therapists, doctors and any person with disabilities looking for help finding the right technology.

For instance, a mom who had a stroke learned how to use an iPad with her reduced mobility and vision, and teachers look to BridgingApps to ensure the requirements of the “common core curriculum” (national education requirements) are accessible for kids with special needs through applications. BridgingApps’ service will give you quick recommendations, online or in person, for applications and assistive technology for almost anything, with a focus on educational requirements and learning.

Cristen met co-founder Sami, who has a child with cerebral palsy with some similar communication needs as Vincent, during that fateful period in 2010. While Cristen had the communication and education skills, Sami had technical chops, so they combined forces and built a website where they posted ideas and information from the group’s meetings. Easterseals  invested in Google Translate to assist users all over the world in searching for relevant apps in their own language.

Today, Sami is a volunteer for BridgingApps and Cristen works full-time as the program coordinator. She, along with Easterseals Houston CEO Elise Hough, are looking for ways to expand.

“If you have a child that learns differently, then BridgingApps can give you the tools to help them,” says Elise. “Right now, if a parent Googled ‘math app for a 14-year-old with special needs’, he/she might get thousands of results. It’s overwhelming. Easterseals’ BridgingApps offers recommendations you can trust.” Parents, kids, special education teachers and certified therapists are part of the app review and recommendation process.

“The Verizon award was so satisfying because we were one of the only nonprofits, competing with companies from all over the world,” says Cristen. “With the award, we can find even more ways to empower people with disabilities to help themselves.” Not even the iPad could say it better.

Visit BridgingApps to get technology recommendations.