Meet this trailblazer who wants to stop bullying 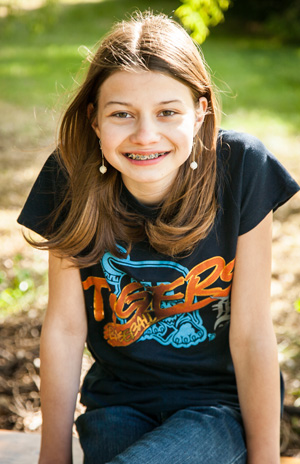 Was it ADD? Anxiety? Post-traumatic stress disorder? The Kozak family didn’t know what was plaguing their daughter Abby. But with the help of Easter Seals Michigan they found out, and they got the treatment and services they needed to make life better for the whole family.

For years, Margaret Kozak and her husband, Scott, wondered how they could help their daughter Abby, now 16, who was prone to furious meltdowns and other behavior problems. “It’s been a difficult process to get her diagnosed,” explains Abby’s mom. “At 6, she was diagnosed with post-traumatic stress disorder, then ADD, then severe anxiety. But nothing ever really explained why she was doing what she was doing. No matter what we tried to do, nothing worked.” Three years ago, when the Kozaks’ health insurance changed, they were referred to Easter Seals Michigan for a new therapist for Abby.

Easter Seals Michigan worked to match her daughter, who was diagnosed with Asperger’s syndrome, with a therapist who understood Abby’s needs. Their therapist was then able to develop a comprehensive approach to Abby’s care – setting her up with additional help at her school, getting her involved with Easter Seals Michigan programs, and providing support to the Kozaks through individual counseling for all family members. After several meetings with the Kozaks and their daughter, therapist Marianna Fletcher asked them how much they knew about Asperger’s syndrome (also called high-functioning autism). Fletcher diagnosed Abby with the disorder and began treating her with medication and behavioral therapies. While life for the Kozaks didn’t change overnight, the family began to notice improvements in their lives both at home, and for Abby at school. “When it comes to Abby, Easterseals has helped us understand her and they’ve helped her figure out how to manage certain things.”

Beyond family and school life, Easter Seals Michigan actively encourages individuals we serve to get involved in the community. For Abby, becoming part of Easter Seals Michigan Teen Advisory Council was not only a chance for her to serve the community, but also an important part in her treatment. “It took a year of coaxing to get her to join,” explains her mother (social awkwardness is a significant symptom of Asperger’s). “But that’s where she’s just blossomed socially.” Abby agrees. “Lately, we’ve been working on an anti-bullying campaign. We’re planning a march,” she says. “It’s been a lot of fun just to hang out with a lot of different people who had similar problems to mine, so I related to them. I just feel comfortable.” The council of teens, which is part social group, part advocacy group, meets every two weeks rotating between the Easterseals offices in Auburn Hills and Southfield.

Through her involvement in Easterseals, Abby, who used to shun crowds and keep mainly to herself, has been able to accept a role as an Easterseals’ Child Ambassador. The assignment has given her a chance to talk to several groups about the importance of the services offered through the organization. In September 2014, she participated in the annual “Walk With Me Detroit” fundraising effort at the Detroit Zoo. When asked if she was anxious about being involved, Abby thought about it for a moment: “It was kind of like, more like an excited type of anxiety. I was nervous about what was going to happen. But then I noticed that my friends were there from the Teen Advisory Council. I saw them and I thought, ‘O.K., I’m good.’ It felt pretty good.”