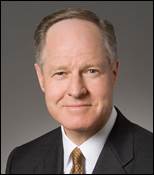 Richard A. Smith is chairman, chief executive officer and president of Realogy Holdings Corp. (NYSE: RLGY), a global leader in residential real estate franchising with company-owned real estate brokerage operations as well as relocation, title and settlement services. He has led the Company’s business operations for the past 19 years. Under Smith’s leadership, Realogy has been recognized as one of the World’s Most Ethical Companies by Ethisphere Institute in each of the past five years. In 2012, the Company completed one of the largest initial public offerings of the year, and in 2014 it acquired ZipRealty Inc. to leverage its innovative technology platform across Realogy’s franchise brands and company-owned brokerage operations in the United States.

Smith is a member of the Business Roundtable, an association of chief executive officers of leading U.S. companies, and serves as a commissioner on the Bipartisan Policy Center’s Housing Commission and on the executive committee of the Policy Advisory Board for Harvard University’s Joint Center for Housing Studies.