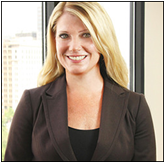 Meredith Sugar is a partner with the law firm Taft Stettinius & Hollister LLP in the firm’s Columbus office. Her practice is focused in the area of business and finance, estate planning and wealth transfer, tax planning for individuals, corporations and partnerships, business succession planning and nonprofit entities. Meredith was ranked as a Columbus CEO “Top Lawyer” in 2015 and listed as an “Ohio Rising Star” by Law & Politics in 2013. She received Columbus Business First’s “Forty Under 40” Award in 2010. Meredith obtained her J.D. (1999), M.Ed. Mathematics (1996) and B.S. Mathematics (1995) all from The Ohio State University (Go Buckeyes!).

Meredith is heavily involved with nonprofit entities and currently serves as the Past President of The Alexander Graham Bell Association for the Deaf in Washington, D.C. She served for nine years on the Board of Easter Seals Central and Southeast Ohio and finished her term as President of the Board in 2012 and Immediate Past President in 2014. Meredith serves on the Parent Advisory Board of Nationwide Children’s Hospital, Columbus, Ohio, and has served on the boards of Deaf Initiatives, Inc., The Professional Advisory Board of the Catholic Foundation, Columbus, Ohio, and as a director and trustee of other organizations. She is a recipient of the Ohio State Bar Foundation Community Service Award (2011) and the Columbus Bar Association Community Service Award (2010).

Meredith resides in Columbus, Ohio, with her husband, David Sugar, and their five children. Her third son, Jonah, was born with profound hearing loss in 2006. Jonah became one of the first children in the United States to receive simultaneous bilateral cochlear implants. Meredith is particularly proud of Jonah’s achievements, in addition to those of her other children.

Elected to the Easterseals National Board of Directors in 2016, Ms. Sugar currently serves as vice chair of the Governance Committee and member of the Affiliate Relations Committee and the Public Policy Committee.