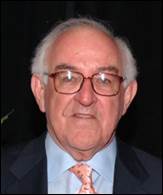 Lou Lowenkron is the former board chairman and CEO of A&W Brands, Inc., and former president and CEO of G. Heileman Brewing Company. In his 38 years in the soft drink industry, Mr. Lowenkron was associated with companies such as PEPSICO and Cadbury-Schweppes and served as a member of the National Soft Drink Association Issues Committee. He was named the Beverage Industry Man of the Year in 1989 and was inducted into the Beverage World Hall of Fame in 1994. After retiring in 1996, Mr. Lowenkron had the opportunity to sit on a number of corporate boards, including three New York stock exchange companies. A major advocate of Easter Seals, Mr. Lowenkron’s leadership and support were instrumental in A&W Brands raising approximately $4 million for Easter Seals during his tenure as chairman and CEO over the seven-year period of 1987-1993.

Named an honorary member of Easter Seals National Board of Directors in January 1994 and elected to the board to complete an unexpired term in July 1994, Mr. Lowenkron was elected in November 1995 to a three-year term. He held the positions of second vice chairman of the board in 1996, first vice chairman in 1997-1998, and chairman in 1999-2000. In June 2001, the Lou Lowenkron Program Innovation Award was established in his honor to recognize an affiliate staff member each year that made a significant innovation in services for people with disabilities. Mr. Lowenkron was elected to serve again as chairman of the board in 2004 and re-elected to serve in 2005 and 2006. At the July 2009 board meeting, Lou was elected to Easter Seals Board of Directors as a lifetime member.