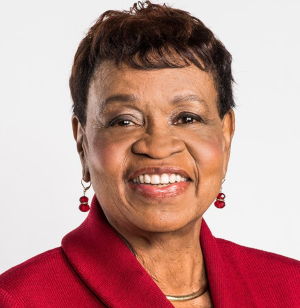 Dr. Catherine “Alicia” Georges is an educator, practitioner, and community activist. She is currently Professor and Chairperson of the Department of Nursing at Lehman College of the City University of New York. Dr. Georges has worked in various professional roles in New York City. A sought-after speaker, Dr. Georges has spoken on nursing and health care issues throughout the United States, Africa, South America, Europe, and the Caribbean. Her professional career spans more than three decades.

A formidable leader, she is committed to eliminating disparities and improving the health of minorities and the disadvantaged. To accomplish this goal, she has assumed numerous leadership roles in education, the community, and the public policy arena. She was the fifth president of the National Black Nurses Association, an organization representing more than 150,000 Black registered nurses, licensed/vocational nurses, and student nurses throughout the United States, Africa, and the Caribbean whose primary purpose is the advocacy for access to equal and quality health care. She is currently the President of the National Black Nurses Foundation and Chairperson of the Board for the Bronx Westchester Area Health Education Council (AHEC). Dr. Georges served on the U.S. Department of Health and Human Services Advisory Council on Nursing Education and Practice and has served on the New York State Governor’s Health Care Advisory Board. She is the former chairperson of Bronx Community Board #12 and served as the Secretary Treasurer of the International Society on Hypertension in Blacks and is past President of the Commission on Graduates of Foreign Nursing Schools (CGFNS).

Dr. Georges has served as a teacher, consultant, and mentor to others in the profession and has worked as a public health nurse consultant for various Head Start and pre-school programs in New York, New Jersey, and the U.S. Virgin Islands. She has shared her expertise and knowledge with nurses, human services, and educational professionals while conducting workshops on leadership development, conflict resolution, as well as on alcohol, tobacco, and use of other drugs. As an entrepreneur, she formed CAG Home Health Services, a healthcare business in the U.S. Virgin Islands. This business is approved as a continuing education provider by the Virgin Islands Board of Nurse Licensure.

Dr. Georges is widely published in journals such as Image, Nursing Leadership Forum, Nursing Administration Quarterly, Ethnicity and Disease, and the Journal of the National Black Nurses Association. She has been the recipient of numerous grants, more recently serving as the Project Director of a $340,000 W. K. Kellogg Foundation Grant to support dialogue and action to inform policy makers of the impact of the nurse shortage in minority and underserved communities. Dr. Georges holds licenses to practice nursing in the states of New York, New Jersey, and the U.S. Virgin Islands.

Dr. Georges has been the recipient of numerous honors and awards for her continued work in nursing, healthcare, and the development of health, social, and public policies. In June of 1998, Dr. Georges was the recipient of the American Nurses Association Mary Mahoney Award for her work in increasing minority representation in nursing. Select other awards include New York State Legislative Nurse of Distinction; King Chavez Parks Visiting Scholar; School of Nursing University of Michigan, Mabel Staupers Award; Women in Public Service Award; and the Jane Delano Distinguished Service Award.

Dr. Georges received a Bachelor of Science in Nursing from Seton Hall University College of Nursing; a Master’s of Arts degree in Community Health Nursing Administration and Supervision from New York University School of Education, Division of Nursing; and a Doctorate in Educational Leadership and Policy Studies from the University of Vermont. She is a member of Sigma Theta Tau International Nursing Honor Society, Golden Key Honor Society, Alpha Kappa Alpha Sorority, and an honorary member of Chi Eta Phi Nursing Sorority. She belongs to the American Public Health Association, American Nurses Association, New York State Nurses Association, National Black Nurses Association, and National League for Nursing, and is a Fellow of the American Academy of Nursing.

Elected to the Easterseals National Board of Directors in 2020, Dr. Georges currently serves as Chair of the Board.