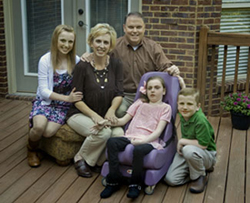 Caroline Long is a sweet 11-year-old girl, whose fun personality comes through despite her inability to speak. She’s a fifth grader from Alabaster, Alabama, who loves school and outings with her family.

Ever since Easterseals introduced Caroline to a computerized assistive communication device that she commands with her eyes, “a whole new world has opened up for her and our family,” says her mother, Drew Ann.

Caroline has Rett syndrome, a disorder of the nervous system that affects only girls. Generally considered a severe form of autism, it especially affects expressive language and hand use.

Her parents, Drew Ann and David, recognized early on that their daughter was not reaching developmental milestones as she moved from infancy to toddlerhood. At 15 months of age, she wasn’t crawling or sitting up, or developing language skills.

On her way to and from work, Drew Ann always drove past the Easterseals center in Birmingham. One day, she called to see if she could schedule an evaluation. “I saw them in my community and I knew what they did,” she says.

Caroline finally was diagnosed with Rett Syndrome at age 4. “The silver lining when we received her diagnosis was that Easterseals had already been able to make a difference for her during her critical early years.” Drew Ann says. “Otherwise, we would have lost all that time,” With weekly visits to Easterseals ever since, Caroline has continued to make steady progress.

Caroline does not walk, but she has been able to take steps with assistance. And, to help her “speak” Easterseals found an assistive communication device for Caroline in early 2010.  For the first time in her life, she could express herself—and connect in a whole new way with her parents, older sister, Mary Grace, and brother, Matthew.

“Easterseals has helped Caroline be the best she can be,” Drew Ann says.” We don’t know what the future holds for her, but with the help of Easterseals, we won’t face it alone.”