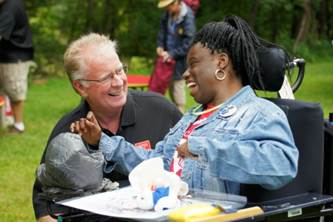 Fitzgerald pictured above with Simone, a camper at Camp Merry Heart

Brian Fitzgerald went from being born and raised in a rough neighborhood in New York City, to rising through the ranks from intern to the position of CEO and President of Easterseals New Jersey, as well as a member of the Easterseals National Board of Directors. Before fully devoting to Easterseals, Fitzgerald served in the United States Armed Forces completing a tour in Vietnam from 1967-1972, where he was recognized for his valor and meritorious service. He later went on to obtain his Bachelor’s and a Master’s in Rehabilitation Counseling from Seton Hall University.

Under Brian’s leadership, Easterseals New Jersey has grown from a $16 million organization to $106 million with a multi corporate structure serving nearly 9,000 individuals in need annually. Fitzgerald has also served as President of the Easterseals Leadership Association. Gaining recognition as a leader, Brian has amassed several reputable awards in the categories of community service, management, rehabilitation and much more. He firmly believes “everyone deserves a chance to reach their full potential.”